The 2017 HITS Ocala Winter Circuit Kicks Off With a Bang

Ocala, FL (January 20, 2016): HITS Ocala is back in full swing as riders and horses gear up for an exciting Winter Circuit ahead. Week I at HITS Post Time Farm commenced with two featured classes: the $5,000 Johnson Horse Transportation Open Welcome on Wednesday and the $25,000 SmartPak Grand Prix on Thursday.

Horses and riders descended on Ocala Horse Properties Stadium for the first featured class of the 2017 HITS Ocala Winter Circuit, and everyone was hunting for the win.

The team to beat was Mattias Tromp of North Salem, New York, and Avon, owned by Swede Ventures, LLC., in a thrilling race against the clock between the top three contenders. Second place would end in the hands of hometown equestrian Aaron Vale riding Elusive, owned by Thinkslikeahorse, and third would go to Kim Farlinger of Orangville, Ontario, and Charming Force B. 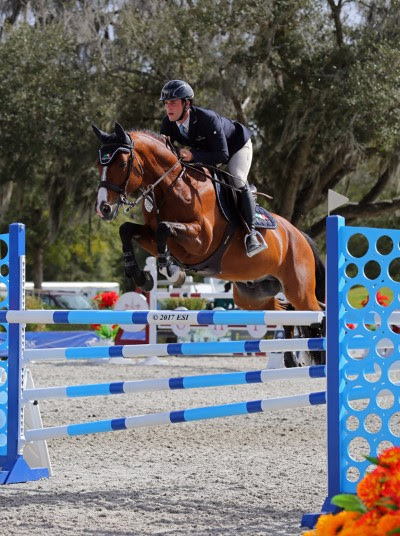 Vale was the first to conquer the first round course set by Mauricio Garcia of Archer, Florida, and advance to the immediate jump-off. He and Elusive laid down a cool, swift round to set the tone for the class, crossing the finish clean in 30.880.

After four trips, another went clear to jump-off— Tracy Fenney on MTM Como No. The Flower Mound, Texas, equestrian would be foiled by a rail at the second element of the mid-course combination, ultimately landing them in fifth with a time of 31.856.

Farlinger and Charming Force B followed Fenney and set down another double clear round. They crossed the timers with all of the rails up in 34.728, not quick enough to catch Vale’s leading time, but good enough for the ultimate third place.

The next jump-off round came from Lisa Goldman of Hawthorn Woods, Illinois, riding Sovereign, owned by Barbara Disko. The mid-course combination spelled trouble for the pair as they clocked in with four faults in 32.282, for the eventual fourth place.

The last pair to advance to the jump-off were the victors themselves, Mattias Tromp and Avon, which certainly kept the thrill of the class going until the end. They knew they had to be quick and clear to bring home the blue.

They set out with their eyes on the prize, zooming through the course and keeping all of the rails up. They finished in 30.105, just tenths of a second quicker than Vale for the win.

Four trips remained in the order but none would advance past the first round, crowning Tromp as the victor.

The first $25,000 SmartPak Grand Prix of 2017 at the HITS Ocala Winter Circuit featured an exciting nine horse jump-off for the top prize. The new partnership of Hayley Waters of Sparr, Florida, riding Chuck and Dana Waters’ Uppie De Lis, took advantage of their place in the order of go to steal the blue ribbon from Tracy Fenney of Flower Mound, Texas, aboard MTM Reve Du Paradis, owned by MTM Farm, by .31 seconds. Lisa Goldman of Hawthorne Woods, Illinois, was third on her own Hindsight with the only other double clear round.

“This is my second Grand Prix with [Uppie] and my fourth class on him, said Waters after her win. “I’ve only had him a month, but I’m always excited to ride him. Thank you SmartPak for sponsoring this class for my first Grand Prix win with [Uppie].” 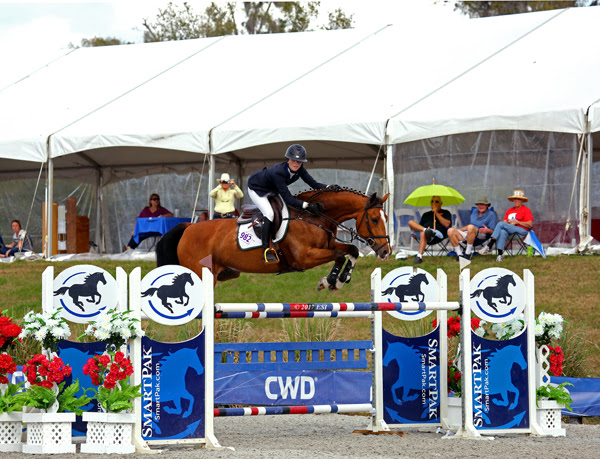 Course designer Mauricio Garcia of Archer, Florida, set a demanding track of 15 jumping efforts for the 25 starters in the first round.

Trainer Mike McCormick of MTM Farm, who had three of his horses place in the top six, had this to say about the course: “The jumps are beautiful, just beautiful; it’s the first Grand Prix of the circuit and it’s plenty hard. It’s set at 1.45 to 1.50 meters, but there a lot of choices that have to be made. Early on, there is an option on a bending line where you can leave one out and do four strides or bend it out and do five strides. The time allowed is tight enough to make you think about being quick.”

Nine horses were able to complete the first round without a fault to advance to the jump-off including Fenney on two mounts, MTM Reve Du Paradis and MTM Como No.

Fenney and MTM Reve Du Paradis were first to return for the jump-off and attacked the course from the start by angling the first jump and hugging the standards to make turns as tight as possible. They galloped through the timers after the final jump, a narrow vertical, to set the Great American time to beat at 38.447.

Lisa Goldman and Hindsight opted to move up in the order while Fenney prepared her second mount. Goldman and he powerful grey Hindsight jumped clear in 40.419 to step into the second-place spot.

Fenney returned on MTM Como No, but had a rail at Fence 3 for four faults in a time of 40.791, taking the eventual sixth place prize.

Kim Farlinger of Orangeville, Ontario, riding Caprice van de Brouwershoeve, had the final rail down to finish fourth in 40.325. Dorothy Douglas, also of Flower Mound, Texas, riding S & L Elite for MTM Farm, had Fence 10 down for a four fault score in 40.434 to finish fifth. Up to this point no one except Fenney had jumped clear in less than 40 seconds and she looked like a sure winner with one horse to go.

Last but not least was Hayley Waters. She rode brilliantly on the experienced Uppie Du Lis and shaved .31 seconds off of Fenney’s time to take the win by a hair.

“He [Uppie Du Lis] has been around so it’s nice to go in confident on one like him – it feels amazing,” said Waters of her ride. “I saw Tracy go and she was really fast, but I just tried to make up a little time after the first jump. I was ucky I got to go last so I knew what I had to do”

Relegated to second place, Fenney joked, “Those darned kids. They should have let an older person win this. Don’t we get a handicap? These kids can really go. That’s what they do best!” 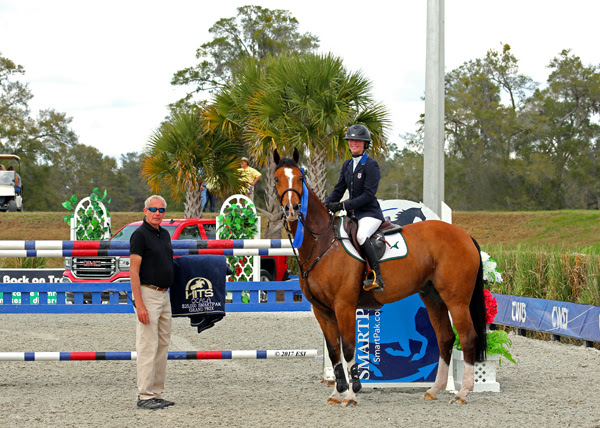