Aaron Vale Flies to the Win in the $41,200 HITS Jumper Classic at HITS Ocala 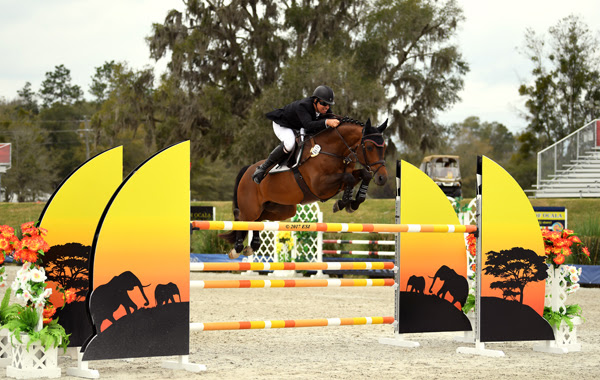 Aaron Vale and Quality on Top. PC: ESI Photography.
Ocala, FL (February 19, 2017): The CSIO4* Week continued at HITS Post Time Farm on Saturday with the $41,200 HITS Jumper Classic. Riders from several countries including USA, Venezuela, Mexico, Canada, El Salvador, Colombia and the recent winners of yesterday’s $100,000 FEI Nations Cup™, Ireland, took their turn over the course set by Marina Azevedo of Sao Paulo, Brazil.The rider to beat would be hometown hero, Aaron Vale riding Quality on Top, owned by North Face Farm. They would indeed finish on top by an impressive three seconds. Third place rider from Venezuela, Pablo Barrios, made Vale work for it though, entering immediately before Vale in the jump-off order, setting down a time Vale had to chase.

“My horses have jumped great all circuit, I just haven’t had luck on my side. Today, it was,” said Vale. “This was this horse’s first ribbon in an FEI class, and for it to be a blue one is pretty special.”

The course was winding and included two roll-back turns and two exciting galloping points that riders could hustle across the ring to shave the seconds off of the clock.

First to return to the shortened course was McLain Ward riding Quinta, a 10-year-old Holsteiner mare he co-owns with Francois Mathy. They laid down a clear round right out of the gate, clocking in at 42.48 to set the tone for the class. The trip would ultimately settle them in sixth place, with the remaining contenders, aside from Vale, all finishing within a few fractions of a seconds of each other.

Pablo Barrios grabbed the next clear round of the eventual top five placings, going fourth in the jump-off order aboard Zara Leandra, owned by ZL Group, Inc. Cheers rang out from the Venezuelan team supporters as they watched them laid down a cool, clear round in 41.17.  They’d ultimately take home the third-place prize.

Vale followed next, taking care to ensure the lead did not stay in Barrios’ hands for long. Vale and Quality on Top powered through the course, flying across the arena from the fifth fence on course to the combination, which required riders to gallop to the opposite end of the ring then change direction.

“I got to watch McLain go, and I thought he was quite fast so I knew I had to be especially quick,” said Vale.“There were a couple of spots early in the course where I could have been faster, but I wanted to be careful too.”

The crowd gasped as they zoomed toward the finish, the lead imminent by their quick speed. They passed the timers in 38.43, a time no other could catch.

“We had a rub in the combination and I actually thought we had had a rail down.  I looked up at the scoreboard a couple of times waiting for the 4 [faults] to come up, but it didn’t – so then I just went as fast as I could to the last few jumps.  My horse is fairly quick-footed, so that really paid off.” 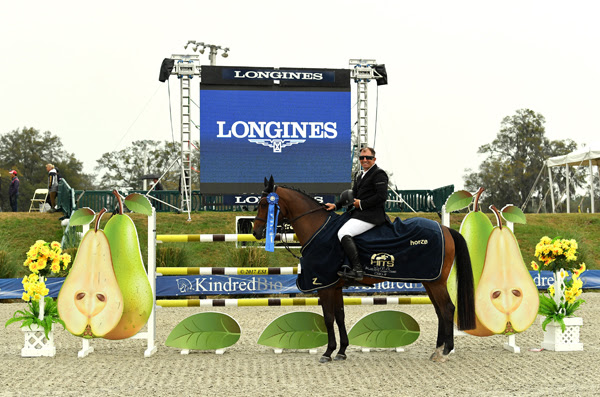 Emanuel Andrade and Mattias Tromp both put in valiant efforts to catch Vale. Andrade, another speedy Venezuelan rider, powered home to a fault-free 41.33-second ride for the eventual fourth place, riding his bay gelding, U.

Tromp, entered behind Andrade in the order piloting Avon, owned by Swede Ventures, LLC. They put the pedal to the metal in the course, trying with all of their might to catch Vale’s leading time. Their finish in 40.33 would settle them in second place.

Ali Wolff would round out the top five riding Quirie, co-owned with John Wolff. They put in a clear round in 41.90 for fifth place.