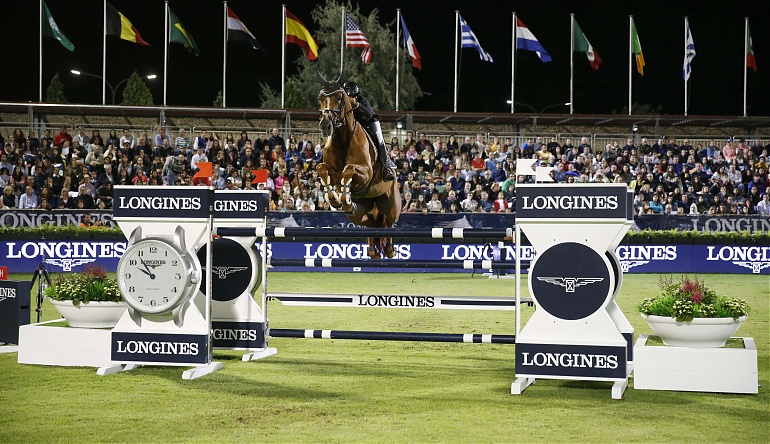 Danielle Goldstein pulled off her first-ever Longines Global Champions Tour Grand Prix win with her “amazing” chestnut mare Lizziemary in a fast-paced jump off in Cascais.

Danielle (ISR) sealed her first-ever Longines Global Champions Tour Grand Prix win by taking a stride out early on before jumping the double verticals superbly and making a great turn back to the water tray fence. Her acceleration over the big oxer with Lizziemary was followed by a determined gallop to the last. Danielle said she knew she had to go all out in the five-strong jump off and the win was “a dream” as “everyone wants to win a Global Champions Tour Grand Prix”.

Dutch champion Maikel van der Vleuten and VDL Groep Arera were pushed into second place over a full second behind Danielle. It was to be a night when young talent shone on the Atlantic coast of Portugal, as in form Martin Fuchs (SUI) finished in third place on Clooney with Bertram Allen (IRE) and Molly Malone in fourth and Belgium’s Jos Verlooy finished in fifth. The young guns, some of the sport’s biggest speed stars, pulled out all the stops but could not beat Danielle. Young American Jennifer Gates finished in an impressive 7th place in the Grand Prix on the impressive grey Luftikus S.

Frank Rothenberger made full use of the foot-perfect grass arena, with a time allowed of 81 seconds. The 1.60m track in the 110m x 70m grass arena on the Estoril coast was to prove seriously testing for the world class field. First to go clear was young Belgian star Jos Verlooy (BEL) with Caracas, the pair leaping expressively around the course. Verlooy was visibly delighted with his grey stallion’s performance, the course suiting the large striding horse. Maikel van der Vleuten (NED) soon created a jump-off after a perfect round from VDL Groep Arera C, with the top Dutch rider keeping himself in with a chance of the overall Championship.

The Longines triple combination caught out a few of the top riders, including Roger-Yves Bost (FRA) with top horse Qoud’coeur de la Loge who collected a tally of 12 faults over the tough track. The crowd cheered in appreciation as home hero Luciana Diniz (POR) entered the arena with Lennox. But it was not to be the popular former LGCT Champion’s night, with 8 faults from the pair ruling them out of the running.

Young star and LGCT Mexico City Grand Prix winner Martin Fuchs (SUI) and Clooney joined those through to the jump-off, after another phenomenal round from the pair. Earlier this weekend, the Swiss rider won a major CSI5* class with the same horse, with the Swiss rider on flying form. Danielle Goldstein (ISR) blazed around the arena with Lizziemary, securing herself a place in the final round, quickest of the field for the majority of the class.

Agonisingly Andreas Kreuzer (GER) rolled the final fence with Cavilot, the crowd groaning as they failed to make it through to the jump-off. Shock came when overall LGCT Ranking leader Harrie Smolders (NED) was caught out by the oxer in the Longines combination, before also clipping the back rail on an oxer down the VIP hospitality with Capital Colnardo. Smolders would have a nervous wait to see whether he would keep hold of the overall lead.

One of the final riders to go, Bertram Allen (IRL) showcased an absolutely masterful round with top mare Molly Malone V. The pair flew around the course, taking the fences with ease, the Irishman looking dangerous for the jump-off to come.

So it would be five to return to the ring, with the packed out grandstand holding their breath in anticipation.

First to go Jos Verlooy (BEL) set off at a powerful pace with Caracas. The pair looked strong, until the grey stallion tossed his head coming to the Longines double, taking out the first element and picking up four faults. Despite this, they set the time at 48.75s, with four riders yet to come.

Maikel van der Vleuten (NED) and VDL Groep Arera C were the first to go double clear, with the mare twisted herself over the fences, and putting all her effort into going clear. The pair had a couple of lucky rubs, but raised the new time to beat with 47.03s overall.

Danielle Goldstein (ISR) set off at a pace with Lizziemary, making a phenomenal turn back to the oxer to shave off the seconds. The crowd roared as they stopped the clock in 45.56s, almost two seconds faster. Danger would come in the form of Martin Fuchs (SUI) and Clooney, with the pair blazing around the arena. But the penultimate vertical caught the pair out, dropping them down the order.

Final rider to go Bertram Allen (IRL) had the crowd on the edge of their seats. Flat out through the start, Bertram powered around the fences looking set to take over the lead. But an unlucky rub meant the pair paid the price, out of contention and off the podium.

So Danielle took the win under the spotlight in Cascais, as Harrie Smolders keeps hold of his overall ranking lead. The Dutchman now sits on 207 points overall, with Maikel van der Vleuten (NED) leaping up to second with 185 points. Christian Ahlmann (GER) drops to third place with 180 points, but with all three in action for LGCT Chantilly all eyes will be on the Championship battle as round 10 kicks off in France.

Jan Tops, Founder and President Longines Global Champions Tour: “You can see that persistence paid off. I’ve known Dani the last few years and how she is riding the last few shows it’s nice to see – it’s amazing and seeing her win this important Grand Prix is wonderful, well done. Harrie is still in a good position, Maikel is second, but I know how the Dutch are – you only get the prize after the finish and we have six important events to go. There are a few riders with less drop scores. Like the League, everything is open.

“You cannot have a better setting for the horses. All the horses are jumping fantastic. The right weather, there’s a nice breeze and the horses were all fresh. It’s a great way for the horses to jump.”

Duarte Nobre Guedes, President LGCT Cascais: “We started small and we’re very big now – it’s a very important event for the region. We are very proud. It’s important in a promotional point of view, to promote our region worldwide, I’m very glad we’ve achieved that. I love sport, it was top competition. Nelson Mandela said “sport has the power to change the world” and I believe that.”

Danielle Goldstein, LGCT Cascais 1st: “It feels great. We come out and we work every day, so it’s a dream to win, it feels amazing. I’m thrilled. We clicked right away [with Lizziemary] – even when I tired her I knew right away that she was my kind of horse, so we’ve been building. We’ve been close a couple of times, so to pull it all together was great. I took a shot at the last but she was with me today. I was happy I was able to execute my plan, and it worked out today. I think everyone wants to win a Global Champions Tour Grand Prix, for me it’s the top of the list at the moment, so I’m thrilled.”

Maikel van der Vleuten, LGCT Cascais 2nd, “It’s my [fourth podium] this season. I can’t complain so far, I had a few weeks behind me which were a little unlucky. My horse gave me the feeling that she gave everything again. There are six legs to go still, so we’ll see!”

Martin Fuchs, LGCT Cascais 3rd: “The season started very well for me already in Mexico City with my big win, my first on the Global Champions Tour. I had some good results after that, and then coming here, and winning the class yesterday was amazing. Today Clooney felt great again, I had a plan to win again, had an unlucky rail down – it was my mistake as Clooney did his best and would have deserved to be on top again.”

Harrie Smolders, LGCT Ranking Leader: “I’m aware my average has to go up to finish on top of the leaderboard. This weekend I was actually here for the team, as I was a substitute for John Whitaker. Capital did a fantastic job, he jumped very well. I’m in Chantilly next week and I’ll ride Emerald there.”