Hampshire, IL – Led by trainers Greg Franklin and Caitlyn Shiels, the horses and riders of Canterbury Farm in Hampshire, IL, just wrapped an incredible winter season competing in Florida at the Winter Equestrian Festival in Wellington, FL, and the HITS Ocala Winter Circuit in Ocala, FL. Shiels completed her winter by making a stop at the Atlanta Spring Classics in Conyers, GA, as well.

Canterbury Farm is a full-service hunter/jumper show facility that offers a family-oriented atmosphere and world-class training program for horses and riders of all levels. 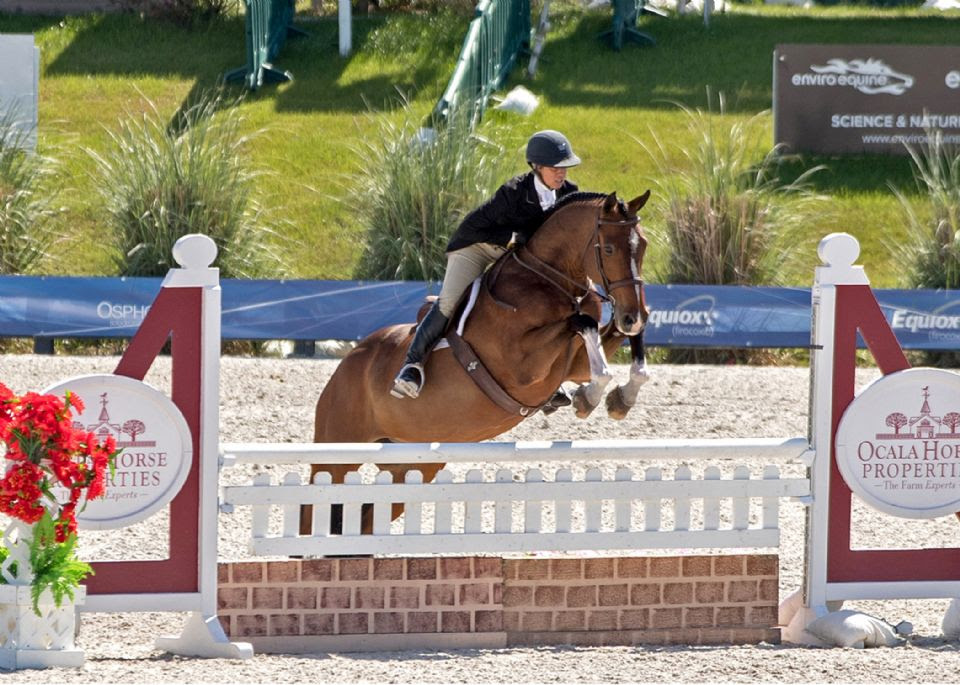 The star of the winter was once again Cassius, an eight-year-old Warmblood gelding that was a brand new ride for Shiels at the start of the 2016 show season. The horse, owned by Don Stewart, started in the Pre-Green Hunters and quickly stepped up into bigger divisions and hunter derby competitions. This year, Shiels has her sights set on qualifying for the USHJA International Hunter Derby Championship with Cassius, and the gelding had a fantastic winter in preparation.

At HITS Ocala, Cassius won the $5,000 Devoucoux Hunter Prix in week seven and was also fourth in the $5,000 Devoucoux Hunter Prix in weeks three and five. He earned great ribbons in the High Performance Hunters every week and was reserve champion of the division in week six. Concluding their time in Ocala, Cassius advanced to compete in week ten’s $50,000 USHJA International Hunter Derby and earned a fifth place finish overall. Before heading home to Illinois, Shiels and Cassius made a stop in Atlanta, where they won two classes in the Performance Hunter 3’6” and finished ninth overall in the $10,000 USHJA International Hunter Derby. 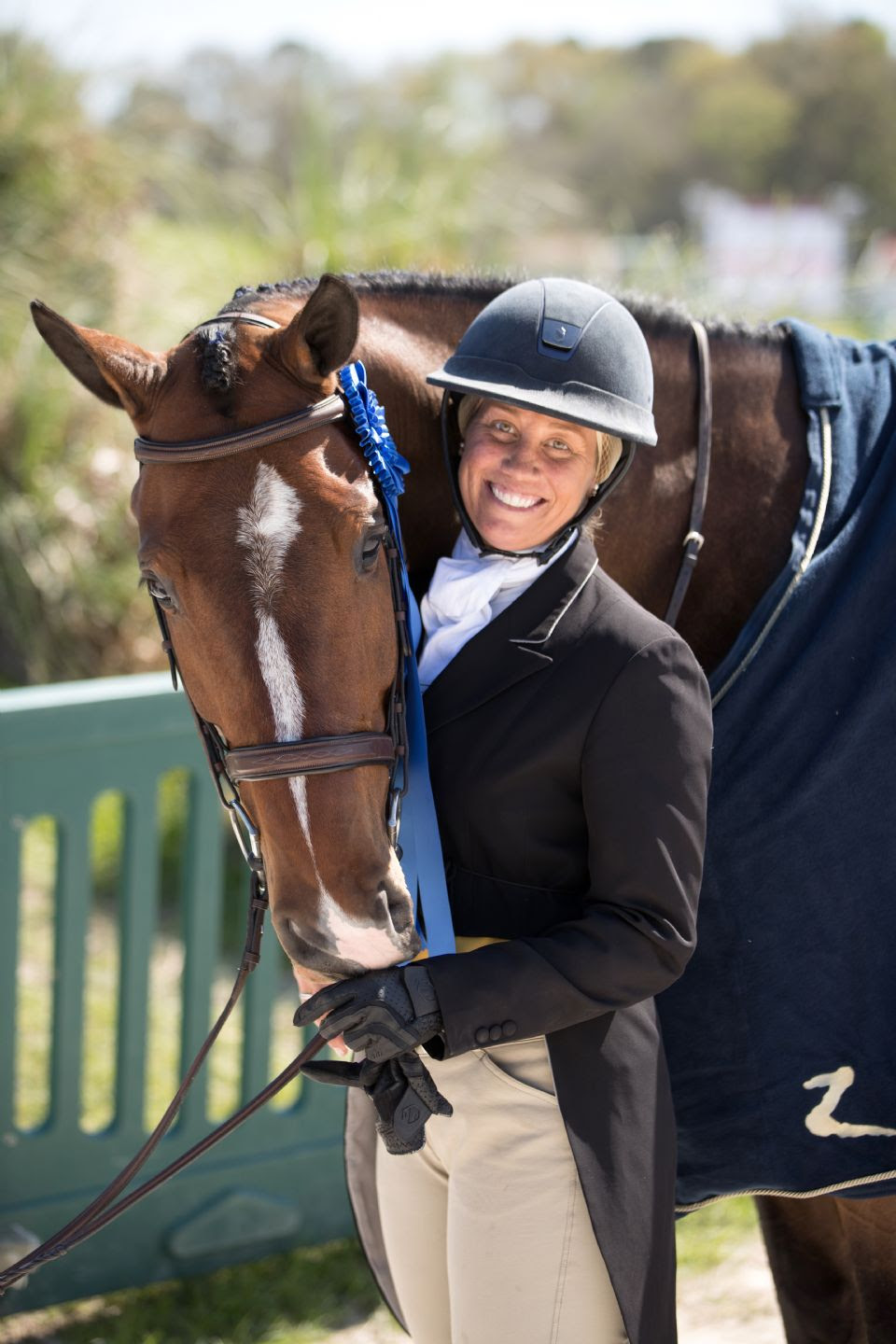 “Cassius was very consistent all winter,” stated Shiels. “We found that incorporating the Hunter Prixs, instead of always doing the High Performance division, was a really good balance for him fitness-wise. I think that moving him up and down, and incorporating the different classes, just continued to build his confidence. It really allowed him to work on his technique and the consistency of his jump, so I think we got a great base out of the circuit.”

Shiels continued, “Our next goal is the Derby Championship, so I think that after a short break at home, we will go back to basics a little bit. Working on some grid work and flatwork at home will be really good for him. We will have a little bit of downtime and start showing again in May.” 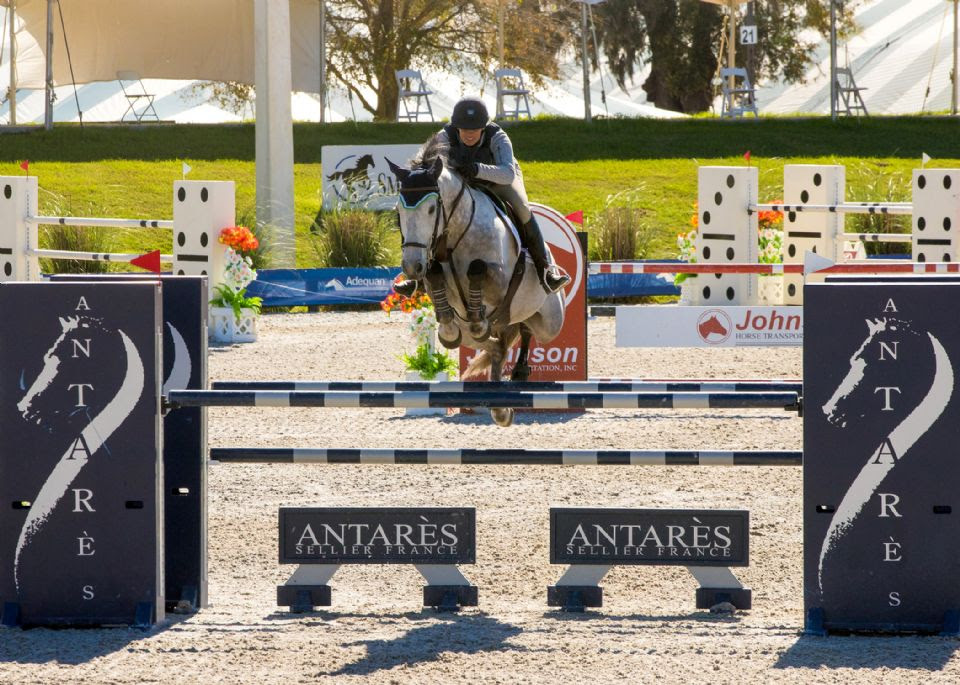 Shiels’s jumper, Cavalier II, also had a fantastic winter. Theten-year-old Warmblood gelding (by Whitesnake) started the winter jumping 1.30m and steadily progressed up to the 1.40m level by the end of the HITS circuit. Cavalier also competed in the Welcome and Grand Prix at the Atlanta Spring Classic, placing sixth in the $5,000 Welcome and fourth in the $25,000 Grand Prix by going double clear.

Shiels imported Cavalier when the horse was six years old and has been successfully developing him up to the grand prix level.

“He was extremely consistent all winter,” detailed Shiels. “He did not show for a few months in the fall and then going to Wellington was a good start to kick things off for the year. We were very consistent in the 1.40m, and I think it was good for both of us. The show in Atlanta was the perfect cap to our winter season.” 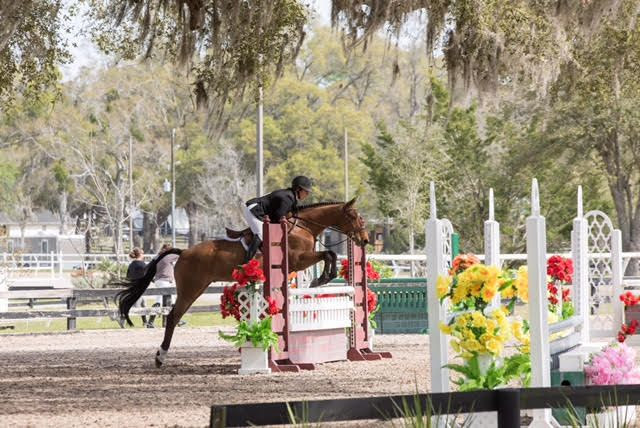 Canterbury client Michelle Durpetti and her seven-year-old Dutch Warmblood gelding Lucca (by Zento) continued their success in 2017. Durpetti purchased Lucca in 2015 and showed throughout 2016 in the Amateur-Owner Hunter 3’3”. The 2016 season became a dream come true for the busy amateur rider, concluding with ribbons at three of the most coveted national indoor finals.

Coming into the winter, Durpetti and Lucca jumped to great ribbons in the competitive divisions at the Winter Equestrian Festival before returning to Ocala for the remainder of the circuit. The pair continued to earn ribbons in the 3’3” division, and by the end of the circuit, they moved up to the 3’6” height. 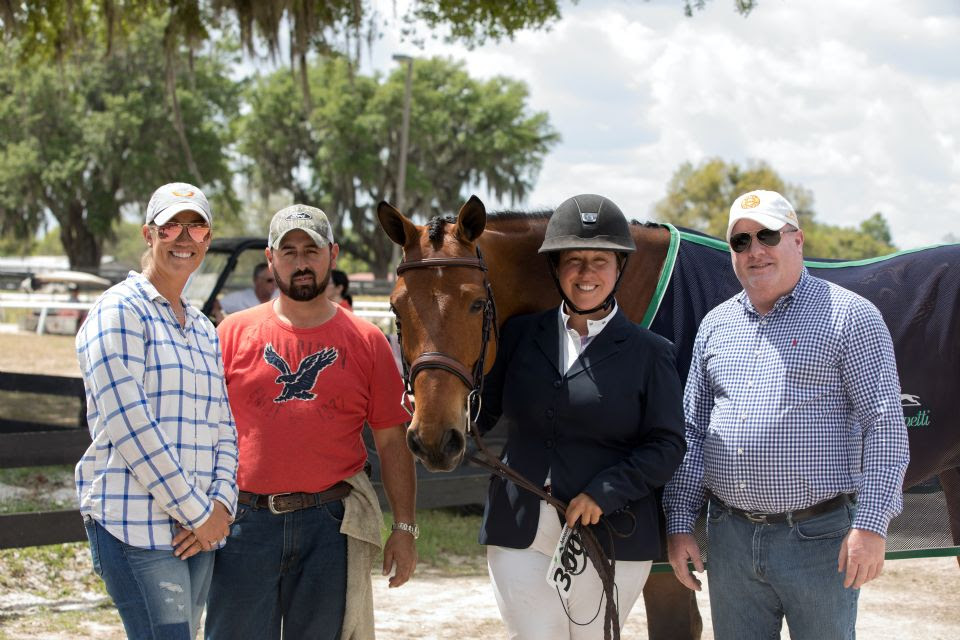 “Michelle was very solid all winter,” said Shiels. “The horse jumped fantastic and she was just very consistent and confident. It was a huge goal that we crossed for her to move up to the 3’6”, and she can check that off her bucket list.”

While Lucca carried Durpetti to top ribbons in the hunter ring, the rider also continued to build her confidence in the jumper ring with her ten-year-old Dutch Warmblood mare Serafina (by Verdi). Durpetti and Serafina made their debut in the Low Adult Jumpers for the first time in Ocala in 2016 and built a great partnership throughout the year. 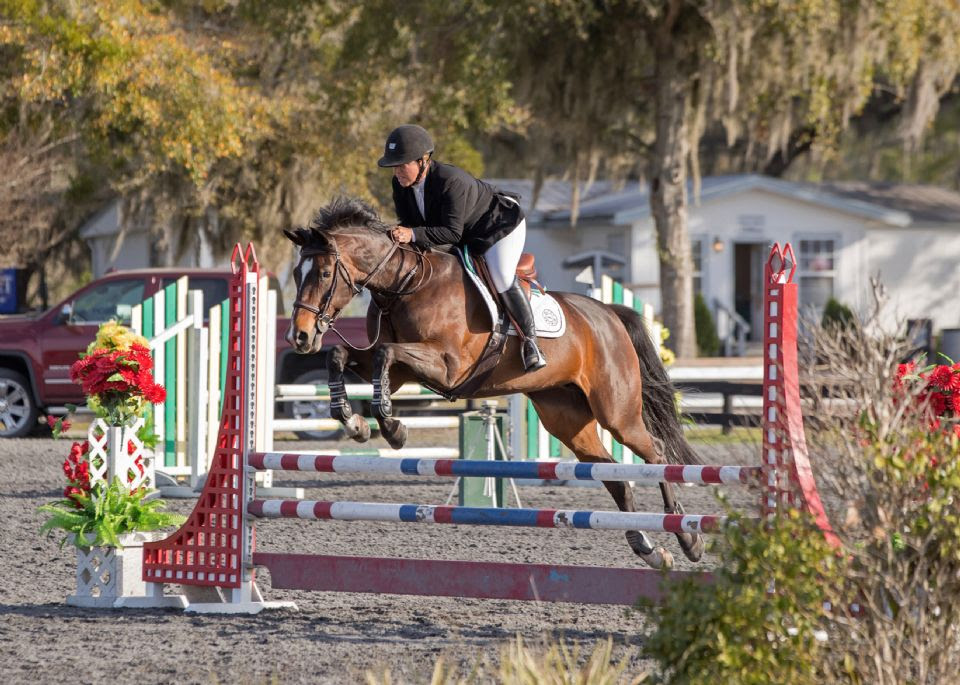 The pair began the winter with placings in Wellington and continued on to Ocala, where they jumped many double clear rounds and moved up to the Medium Adult Jumpers.

“Michelle is getting a lot more confident with the speed and is really learning how to jump the bigger height,” noted Shiels. “We are really proud of that improvement.”

Durpetti had her steady friend Moody Blues in Ocala for the winter as well. Moody Blues made a miraculous comeback from Wobbler’s Syndrome a few years ago and loves to get in the show ring. The pair earned back-to-back championships in the Adult Hunter 3’ division to conclude their circuit.

“Michelle had a blast showing him,” said Shiels. “She always says every day that she gets to ride him is a blessing after his temporary retirement and all of the things he has gone through. That was a fun cap for her for the winter.” 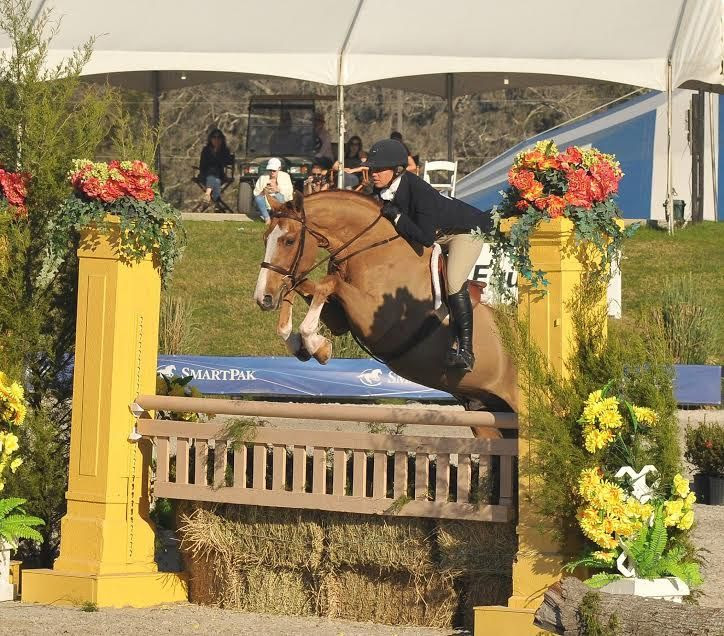 Twelve-year-old Italian Warmblood gelding Gomeri della Caccia, with Shiels in the irons, was reserve champion in the Performance Hunter 3’6” division during the competitive World Championship Hunter Rider week in Ocala. He also showed to a championship tricolor in the Children’s Hunter 15-17 with young rider Alexa Maiello.

At the end of circuit, Gomeri was sold to a new young rider from Illinois, where he will enjoy his new home. Maiello also rode Canterbury Farm sale horse Great Surprise to a reserve championship in the Modified Children’s Hunters.

Both Maiello and young rider Maddie Pogorzelski helped out in Ocala as working students and gained valuable experience helping Franklin and Shiels throughout the winter. Pogorzelski showed Marcia Franklin’s Cydelle and was consistently in the ribbons, earning the reserve championship in the Children’s Hunter 14 and under during week four. In addition to riding, Pogorzelski and Maiello worked with Shiels making feed, turning out horses, and helping with the every day grooming and riding duties. 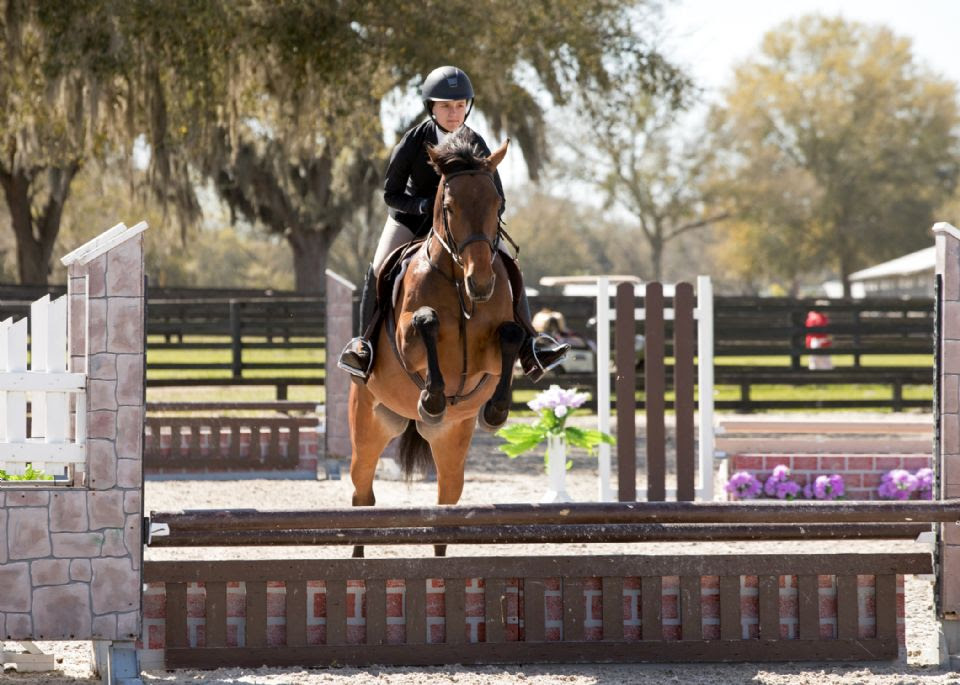 Also riding to great ribbons throughout the circuit, Greg Franklin’s niece, Molly Zygmont, was champion of the Equitation 11 & Under and reserve champion of the Large Children’s Pony Hunters riding Canterbury Farm’s Hillcrest Songbird.

The horses and riders of Canterbury Farm will enjoy the farm in Hampshire, IL, before gearing up for the summer season. They will compete next at the Maffit Lake Spring Gathering Horse Shows in Iowa from May 10-21.

About Canterbury Farm
Canterbury Farm maintains a horse show schedule on a local, regional, and national level that is created with their customer’s competitive goals in mind. For over 35 years, Greg Franklin has ridden hunters and jumpers to numerous championships nationally and has brought home numerous Zone 5 ‘Horse of the Year’ awards. Franklin has qualified horses and riders for the Pennsylvania National, Washington International and the National Horse Shows including the Medal and Maclay Finals. He has also shown internationally at Canada’s Spruce Meadows in the 1.40m and 1.45m divisions and is a certified trainer with USHJA. Additionally, Franklin holds his ‘R’ card in Hunters, Hunter Seat Equitation, and Jumpers, and judges throughout the country.

Born and raised in Sheffield, Massachusetts, Caitlyn Shiels began riding at the age of eight. A highlight of Shiels’ early career was being a team and individual gold medalist at the 2004 North American Young Riders’ Championship. Shiels went on to apprentice under such professionals as Andre Dignelli, Mclain Ward, Ken Smith and Kate Stoffel-Oliver. Almost immediately after she joined the Canterbury team in 2013, Shiels and Franklin both began earning championships at major shows. Their partnership is an excellent balance of training both on the horse and from the ground.

With qualified trainers, attention to detail, and a caring staff, Canterbury Farm is committed to excellence in horsemanship, and to giving all of their riders a great experience in the show ring.