Jumper Classics kicked off in the Grand Prix Ring on Wednesday with the Johnson Horse Transportation Open Welcome. Taking home first and fourth place honors was Kyle King aboard ANDIAMO VH KAPELHOF Z and ESCUDO’S TRIUMPH, respectively. King had two clear jump-offs in 32.133 and 35.125 to capture those top spots in the standings. Second place was Christian Heineking and NKH CALANGO who finished with a clear jump-off in 33.336, followed by Jeff Campf and NINOU 2 in third with a time of 34.379. Rounding out the top five was Natasha Traurig and CHOOSE ME with a clear jump-off in 35.221.

Building on their second place finish from Wednesday, Heineking and NKH CALANGO took home the top honors in the $30,000 SmartPak Open Prix on Friday. Heineking completed the jump-off fault free in a time of 39.994. “I’d like to thank the owners and NKH, LLC for their support and SmartPak for sponsoring the class. I use SmartPak products in my barn” said Heineking.

Less than a second behind was Savannah Jenkins and CAMPARI who jumped clean in 40.368. Jenkins would also take home the top honors in the U25 Classic that was held as an overlay with the SmartPak Grand Prix. Campf and WOODSWORTH II finished in the third place position with a clear round in 40.424 and fourth place was awarded to Kenneth Vinther and COLICCHIO as they finished the jump-off in 41.169. Shawn Casady and his partner, VALINSKI S, would round out the top five in the class with the fastest time of 38.623, but unfortunately a rail down gave them a four-fault score. 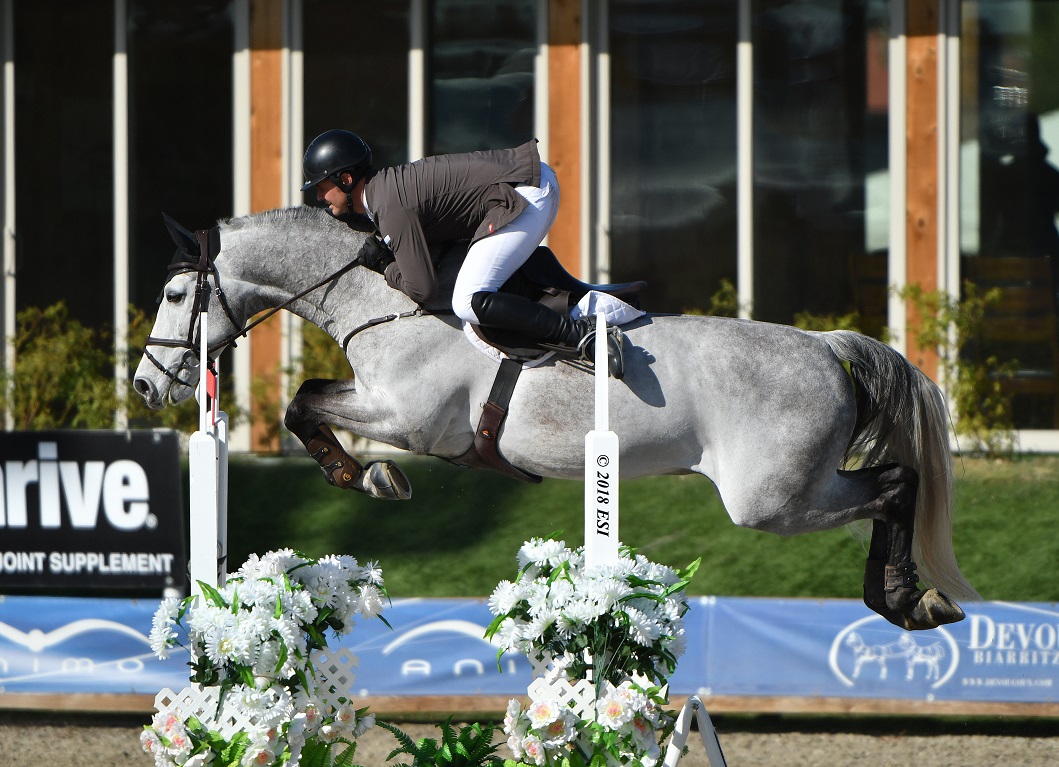 In the $15,000 KindredBio Jumper Classic, King and ANDIAMO VH KAPELHOF Z would take the lead in the class with a lighting fast jump-off in 29.251 and no faults. The second place ribbon was awarded to Casady and PLAYBOY BLUE VH Z with a clear jump-off in 30.043, less than a second behind than King. With a clear jump-off in 30.971, Mattias Ekeroth and DACARLOS would take home the third place honors, followed by Tamie Phillips and ECATINO with a 31.088, four-fault jump-off to take home fourth place. Rounding out the top five entries was Gingras and DAYLIGHT VDL with two rails coming down to give them an eight-fault score in 30.150. 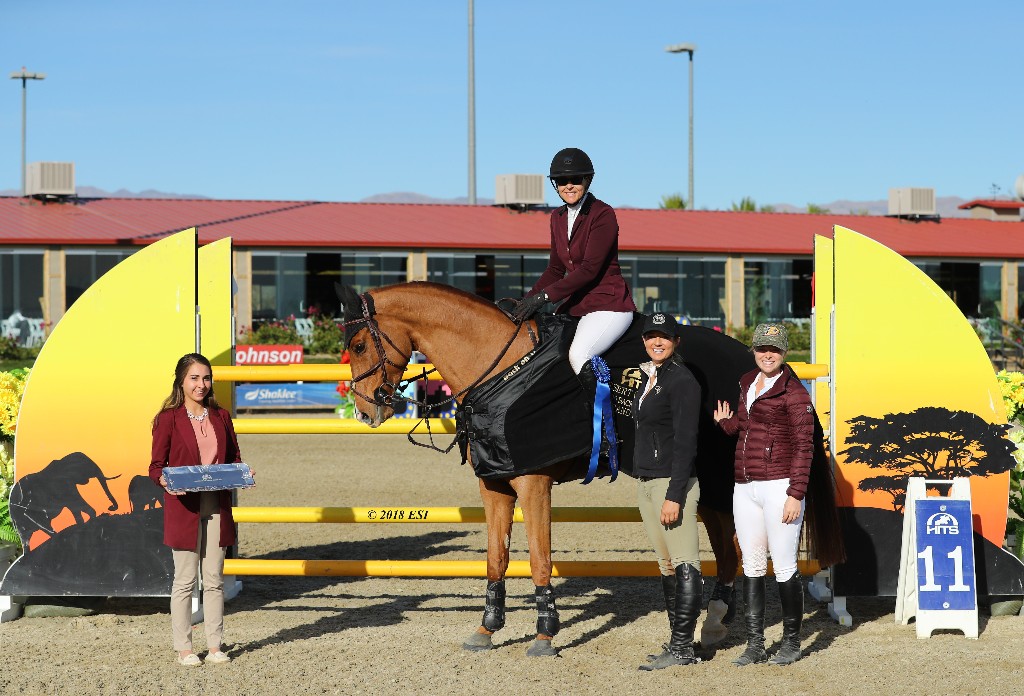 Michelle Parker and VANCOUVER 45 are all smiles after a win in the $70,000 Back on Track Grand Prix.

Excitement filled the grandstands of the Grand Prix Ring on Sunday as spectators gathered to cheer on riders competing in the $70,000 Back on Track Grand Prix. Taking home the blue ribbon, cooler, trophy, and all the congratulations was Michelle Parker and VANCOUVER 45. Parker flew to the first place finish fault-free in 37.572. “It was a good course for Week I, the track was fair which is ideal to have the first week of a show” said Parker. Of her 11-year-old Hanoverian who she has had for several years, Parker said, “he is the world’s friendliest horse and loves to have his face pat; he will stop eating to hang his head out of his stall and get attention.” 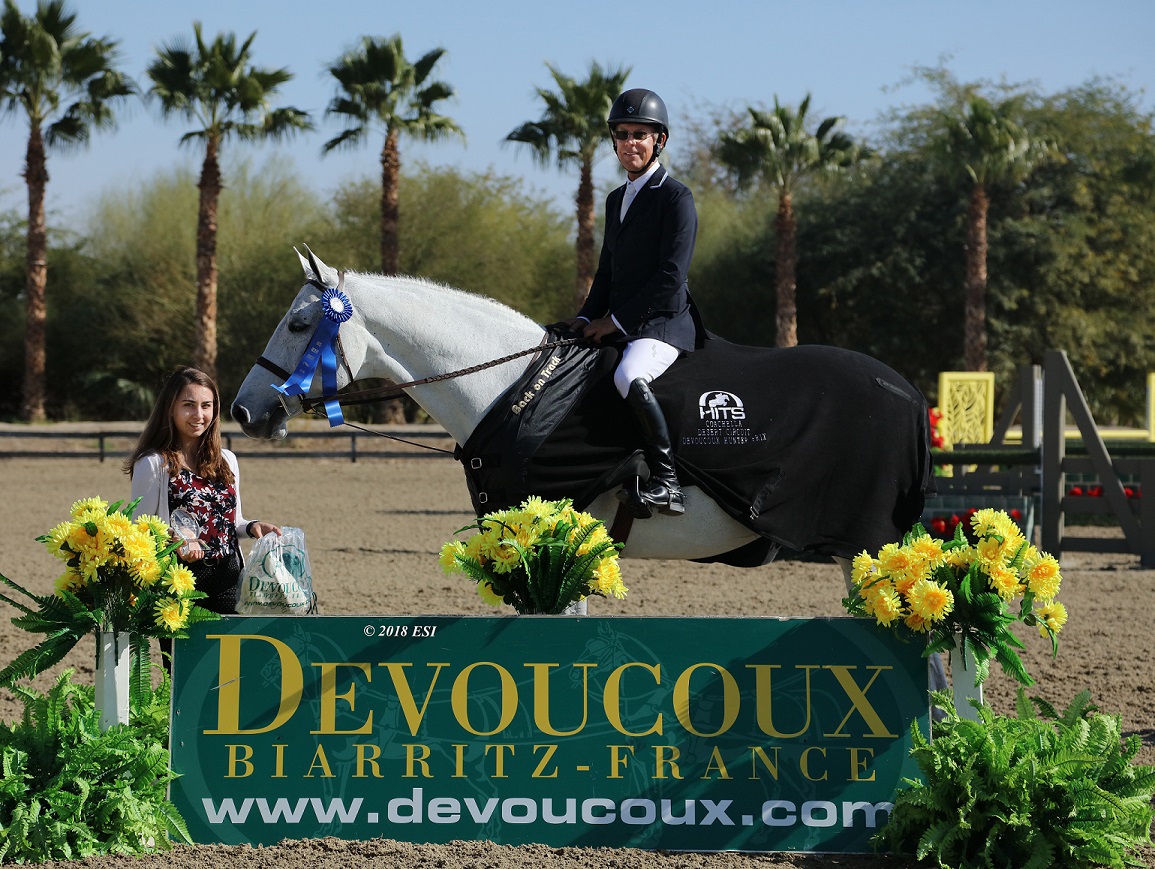 John French and SOLDIER after a successful ride in the $5,000 Devoucoux Hunter Prix.

It was also an exciting week in the Hunter Rings, where the $5,000 Devoucoux and the $1,500 Platinum Performance Hunter Prix took place. Riders who compete in these earn points toward qualifying for the HITS Championships that will take place in Saugerties, New York, September 5-9.

In the $5,000 Devoucoux Hunter Prix, John French and SOLDIER would take home the blue ribbon with a combined score of 176.5. The second place ribbon was awarded to Hope Glynn and KING OF HEARTS, riding to a two round total of 176. To round out the top three in the class was Shelley Campf and her partner COMMONWEALTH who rode to a combined score of 173.

Amy Brubaker and CONVARO took home the top honors in the $1,500 Platinum Performance Hunter Prix with a combined score of 166. Both the second and third place ribbons were awarded to Lauren Burke with her partners, VALENTINA and BASIC INSTINCT. She received two round totals of 151 and 148, respectively.