The Spruce Meadows ‘Masters’ Tournament proved its reputation correct  for being one of the most challenging and respected tournaments in the sport of Show Jumping. The Tournament began its first day with an impressive entry of international athletes primed to test their skill in the famed International Ring.

The afternoon’s 1.60m event was won by Juan Carlos Garcia(ITL) who’s last visit to Spruce Meadows was in 2012. Happy to be back in the International Ring, Garcia praised his mount Gitano V Berkenbroeck, a Belgium Warmblood Stallion by Nabab de Reve.

“This horse is very brave, no spook at all, good power, great head and this field is very good for him.” Garcia continued, “The courses are different then what I am used to, the time is quite short and the first round needs to be ridden more like a speed course. There is so much space and the grass field is unique and the jumps are quite wide which all comes into play.”

“This was my first time so I had heard rumors of how it could be, and with a very careful horse I didn’t know whether it would go well or not. It’s different from what we are jumping at home in Europe, but its nice – a nice course – the time was tight which is what I heard to expect when coming here so I needed to get going fast.”

Off to a great start at the ‘Masters’ Tournament, also enjoying, her Spruce Meadows debut was Luciana Diniz of Portugal. Luciana rode Winning Mood, an 18 year old Belgian Warmblood stallion, to the bronze medal position out of a 48 horse roster, with just nine returning for the jump off. Out of the six double clear performances, the top three were all within 0.32 seconds of each other. This all provided a thrilling jump off show down against the clock to launch opening day of the famed Spruce Meadows ‘Masters’. 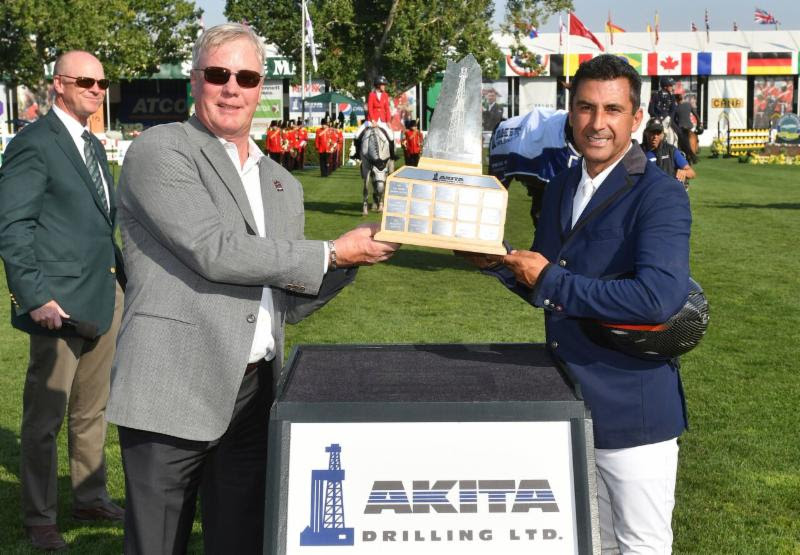