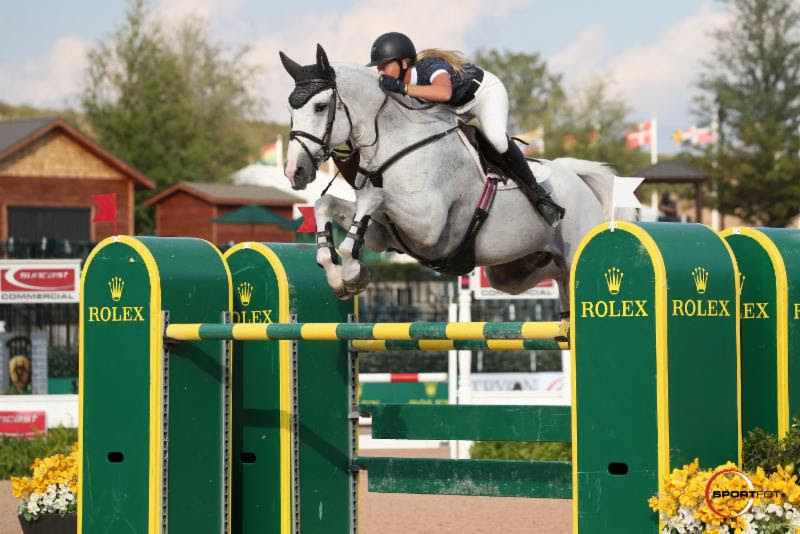 The Michel Vaillancourt (CAN) designed track saw 82 entries, of which 20 pairs qualified for the jump-off and 13 went double clear. Vanderveen and “Frosty” were fresh and ready to make up for past losses today, she explained. “Kent and I were just at Central Park together and he got me in both classes, so knowing that Kent was behind me and is incredibly fast, I wanted to lay it out and take all the risks I could and see what we could end up with.”

Bull Run’s Faustino De Tili, a 2005 BWP stallion (Berlin x Bijou Van De Vijfheide), has not jumped in two weeks, said Vanderveen, so she was primarily focused on managing his energy today. “He can be a little bit strong, so I didn’t know how strong he would be today,” she commented. “He’s had a bit of a vacation for the past two weeks and hasn’t jumped at all, so my biggest thought today was about how and where he could get strong towards the end of the course, or at a few verticals, but he loves this ring, loves Tryon, and was listening well today.”

The pair have been together for three years, but have really succeeded at high levels starting this year, explained Vanderveen. “The first year [I had him] it really took us a while to get to know one another. We still had a couple Grand Prix wins in there, but it was very up and down, and last year I did a lot of 1.45m Speed classes, and we were clicking there, and this year we’ve really clicked at a higher level and are starting to make classes,” she said.

Vanderveen — who won her first CSI 5* competition at Tryon International Equestrian Center (TIEC) and is known as the “Tryon Queen,” — admitted that she’s excited for next week’s CSI 5* competition. “If everything keeps going well I’ll probably use him in the CSI 5* next week, and possibly at the CSI 4* in Kentucky, and we’ll keep going as long as he still feels fresh,” she concluded.