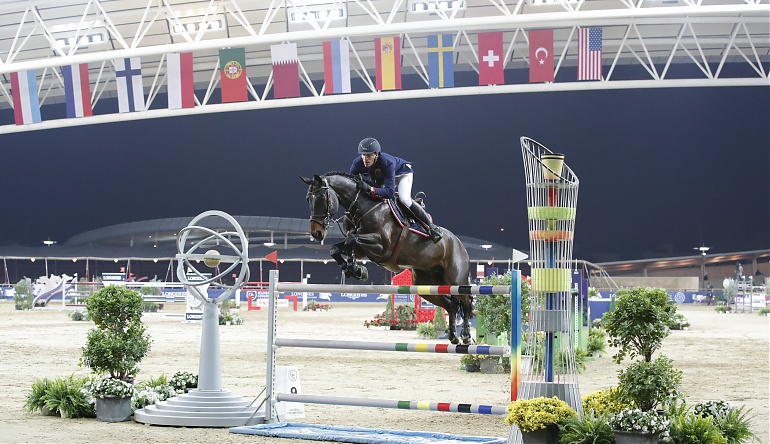 The big guns came out in full force for the first round of the Global Champions League, with Mexico Amigos taking pole but high drama in the battle between Championship contenders Hamburg Diamonds and Valkenswaard United.

Setting up an unmissable finale to the GCL season, both the Diamonds and United pulled out all the stops to keep their title dreams alive. United rider Bertram Allen – who teamed up with Alberto Zorzi in tonight’s first round – said: “We’re delighted with our horses’ performance today and knew we had to go double clear to be in with a chance. The Diamonds are strong but for sure we’ll be fighting until the end.”

Tonight’s competition hinged on clear rounds and three teams produced double clears under the AL SHAQAB spotlights in Qatar’s capital city of Doha. Mexico Amigos lead the way into Saturday’s finale as the fastest of the faultless trio, with the Paris Panthers and defending champions Valkenswaard United heading the pack of 18 teams.

“We are in the best position,” said Henrik von Eckermann of the Mexico Amigos after their pole position today. “Both horses jumped really well. If we win, we are third [in the overall championship] so that is what we are trying for.” His team-mate and student, the U25 rider Evelina Tovek added: “I’m really happy to produce a clear round for the team.” Evelina on Castello for the Mexico Amigos. PC: Stefano Grasso

Coming in to the final leg, it was the Hamburg Diamonds who held the best cards and just need to finish in the top eight on Saturday to claim the title. However, a surprise nine-fault total puts them in 11th place with a fight on their hands if they are to soar ahead of their rivals United to be crowned GCL champions of 2017.

Consistent form throughout the season has proved vital and Hamburg Diamonds came into the final in the lead, just 17 points ahead of defending GCL Champions Valkenswaard United. But there was drama up and down the grid ahead of Saturday’s final as a coveted podium place is still to play for between several teams.

Uliano Vezzani set a deceptively simple 13-fence 1.55m track for the 18 team challengers. A wide triple bar at fence two followed by a holding six strides to a light set of planks proved the first test as related distances were peppered round this huge arena. The Italian designer offered riders the chance to take a breather round the corners on this unrelenting track, but the 84s time allowed was a conscious reminder that there could be no let up. Faults were evenly spread with the width on some of the oxers just taking their toll and it was a long way home towards a 1.55m set of planks to finish.

“The course is tough enough – some big jumps, perhaps not too technical, but it’s a long course,” said Chantilly Pegasus rider Lauren Hough.

Clear rounds proved elusive to start with and it wasn’t until 10th rider, Lillie Keenan with Fibonacci for the Paris Panthers that we saw the first clean sheet. Cian O’Connor for Miami Glory followed hot on her heels with the athletic Skyhorse and almost joined her as the second clear, but just succumbed to the time allowed.

Alberto Zorzi kept the championship hopes alive for Valkenswaard United with a masterful clear on Fair Light VanT Heike, passing the baton on to teammate Bertram Allen – the pair formidable in their consistency when paired up. His clear was soon followed by Evelina Tovek and Castello of the Mexico Amigos, who has really impressed this season on the 15-event circuit.

The big shake-up came from the final first-line rider, Eric Lamaze and Fine Lady for Hamburg Diamonds, whose nine faults could prove costly in the championship race. Watched on by teammates Smolders and Jos Verlooy, there were groans all round as the faults clocked up, making it an uphill battle for Smolders yet to come.

With only three clears on the cards, the pressure piled high on the teams’ second riders but suddenly the zero scores came thick and fast. Anna Kellnerova and Classic helped the Berlin Lions’ chances with a clear to add to Cindy Van Der Straten’s eight faults and the team now sits 10th ahead of Saturday’s concluding competition.

Bassem Hassan Mohammed for the host team Doha Fursan Qatar, who were sitting seventh in the overall championship, boosted his team’s chances with a clear on the scopey Gunder after Sheikh Ali Bin Khalid Al Thani’s six-fault round on First Devision. They sit one ahead of the Lions in ninth. Maikel van der Vleuten’s clear on VDL Groep Verdi TN pushed Madrid in Motion into fifth on a team total of four, one of a quartet to finish with a four penalty total. (Read about Maikel’s win in the concurrently-run solo class here.) Another of those is the St Tropez Pirates, who have a podium finish firmly in their sights, coming into this final in third place behind the Diamonds and United. They fielded the dream team of Simon Delestre with Chadino and Jerome Guery on Garfield De Tiji Des Templiers – and it was the latter who produced a vital clean score.

London Knights also carry a four-fault total through to the final round and the red, white and blue squad showed true team spirit when Emily Moffitt, who is not riding in Doha, leant her team-mate Eduardo Menezes the ride on one of her horses Galip. The Brazilian secured a majestic clear to complete a four fault total provided by Ben Maher with Quilata, with the team finishing in 7th today. As the second riders entered the ring, Paris Panthers were the first to complete on a zero score courtesy of the debut pairing of Lillie Keenan and Darragh Kenny who had a last minute horse change to compete with Go Easy de Muze.

All eyes turned to the Championship race, and Valkenswaard United’s hopes of a second victory in the GCL were boosted thanks to Bertram Allen and the forward-going Molly Malone. Allen managed the hot mare beautifully, putting in a careful but foot-perfect round to slot in behind the Paris Panthers’ combined time.

Unmissable. The best of the best were out in force for Round 1 of GCL Doha but no one had more pressure than these two…

Rome Gladiators ensured it remained tight at the top as Laura Kraut with Deauville S shook off any pressure to produce a dazzling clear to add to her team-mate Lorenzo De Luca’s four-fault round on Limestone Grey.

The competition concluded, fittingly with the 2017 LGCT overall champion, Harrie Smolders riding his brilliant campaigner Don VHP Z and as always they produced the goods with a perfectly executed clear. A top eight finish is required if they are to take the title, and with nine faults on the cards, they face an intense challenge, but discount the Diamonds at your peril.

Tune in on Saturday to find out whether they or United can triumph in what is set to be a thrilling climax to the GCL season. With team tactics coming in to play, look out for some shrewd substitutions as teams decide which combinations to send out for the final battle.

Can defending Champions United come from behind to take the title home for a second consecutive year, or will the Diamonds shine brightest of all and turn their dream of the Championship crown into reality? All the action will be streamed live via GCT TV and on the official Facebook page at 14:00 local time on Saturday 11th November.

See the full round one standings here.