Devon’s famed blue oval is once again alive with activity as the Fall Classic gets underway, and already our hearts are fluttering for the winners of the $5,000 Welcome Stake, Oliver McCarthy and MHS Automatic. The darling Irish pair of Cerulean Stables outran the competition by more than two full seconds in the jump-off to secure the win.

“He is a fantastic horse and I am very lucky to have him. My cousin Greg Boderick had him two years ago and won several ranking classes with him in Europe and was extremely successful. He sold the horse to Amanda Forte and her mother Elizabeth, and since Amanda is expecting a baby, Greg organized for me to help compete her horses while she is expecting. It’s just such a gift to have him to compete. Every single day you bring MHS Automatic out of the stall he is a winner and he gives you 100 percent.”

Hear Oliver’s overview of the Welcome Stake and see part of their winning round below, courtesy of PawsandRewind!

Originally from Ireland, 23-year old McCarthy (whose cousin Greg was the lone Irish athlete at the Rio Olympics) has made quite a name for himself in his home country and abroad since winning the Young Rider Bursary competition at the 2013 Dublin Horse Show. Only 19 years old then, he earned a chance to ride and train in the United States for two weeks with international competitor McLain Ward, who was so impressed that he offered McCarthy a job riding sales horses and young horses, a job which ultimately lasted three years.

“His program has been a huge help to me as a rider,” said Oliver of McLain.”His discipline and his system is part of my own practices now and I hope I can maintain that moving forward.”

At the beginning of this year, McCarthy made the move to work for fellow Irishman Kevin Babington out of his Pennsylvania-based farm, and he has continued to impress. McCarthy has only been consistently in the irons aboard MHS Automatic since this summer, but the pair have already achieved considerable success together, most recently earning multiple top placings at the Fieldstone Summer Showcase in Massachusetts. Yet, Oliver is entirely humble about his success, attributing it primarily to the individuals who have helped him along the way.

“My brother Darragh has also been extremely helpful to me, and I am really grateful to him as well as Amanda and her mother Elizabeth and Kevin Babington. I feel like I am in such a good place at the moment and I recognize how lucky I am and I just feel very grateful.” 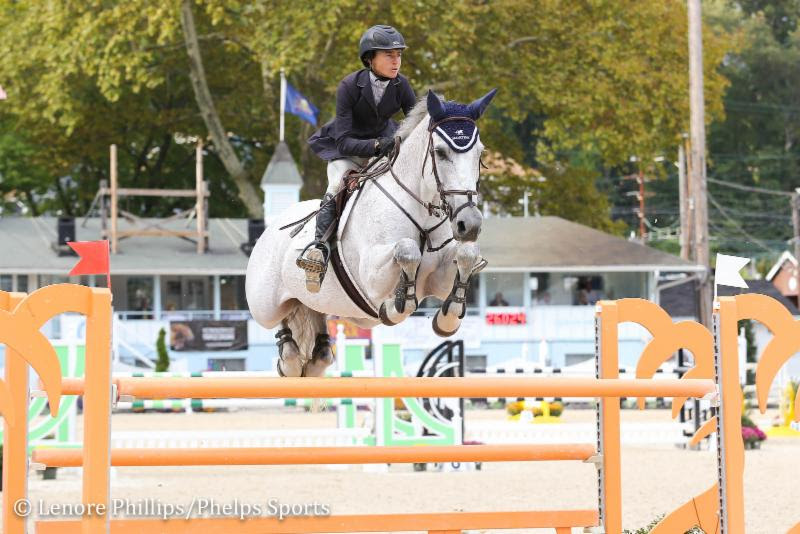 Chapot and Thornhill Kate, owned by Mary and Laura Chapot, finished in the reserve position in the $5,000 Welcome Jumper Stake with their clear jump-off ride in 30.450 seconds, followed by Willie Tynan and KEC City Limits, owned by Red Barn Farm, LLC, who ended on a clean time of 31.260 seconds to round out the top three positions.