Nick Skelton was presented with a special gift from Hickstead today in recognition of his extraordinarily successful showjumping career.

The 59-year-old, who announced his retirement from the sport earlier this year, was invited into the International Arena on the final day of the Longines Royal International Horse Show. During a special ceremony that took place before the Longines King George V Gold Cup, spectators were reminded of Nick’s many achievements within the sport – including his team gold medal at London 2012 and that unforgettable individual gold last summer in Rio.

“We wanted to give Nick something to say a heartfelt thank you for all the many years of enjoyment he has given showjumping fans,” said Hickstead Director Lizzie Bunn. “Nick has been such a vital part of the British Showjumping team and we will really miss watching his skill and brilliance in the arena. Looking back over his record here at Hickstead, there can be few riders who have or will ever match Nick’s achievements at the All England Jumping Course.”

When Skelton claimed individual gold at Rio, he became Britain’s first showjumping individual Olympic champion, as well as Team GB’s oldest gold medallist since Jerry Millner won in the shooting in 1908. Nick’s win at Rio 2016 marked an amazing comeback for a rider who had recovered from a broken neck some 16 years previously, and for a talented horse whose career had been punctuated by injury.

It had never been a secret that Nick planned to retire when Big Star did, and in April came the news that had long been on the horizon but that most hoped would remain some way into the future – Nick and his famous stallion were both calling it a day.

Nick is one of a famous trio to have won three Hickstead Derbies in succession, alongside fellow London 2012 team gold medallist Peter Charles, and his Rio teammate Michael Whitaker (Ireland’s Eddie Macken went one better than the others by winning the Derby four times in a row).

Skelton’s first of three Derby wins came in 1987, when he produced the only clear to win on namesake J Nick, before he had back-to-back wins in 1988 and 1989 with the white-faced Apollo. The pair came very close to equalling Macken’s record fourth win in 1990, only to lose out in a jump-off against Joe Turi and Vital.

“The memory that sticks in my mind the most is in 1981 when Hickstead had three shows each year and I won the Grands Prix at each of them, and then there was my three Hickstead Derby wins,” said Nick. “I have some great memories here, it’s a great showground.”

Looking back at Nick’s stellar record at Hickstead, it’s little wonder that he describes it as a ‘very lucky place for me over the years’. He’s been lucky here, and showjumping fans have been just as fortunate to witness some of his greatest moments in the International Arena. 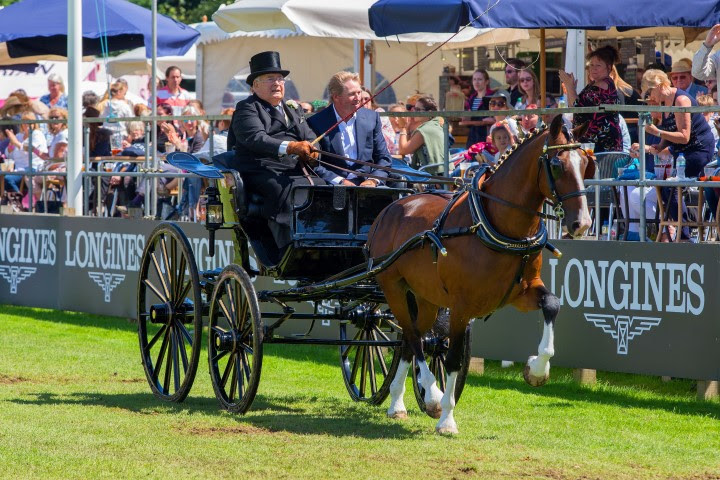 Nick Skelton has one last spin around the International Arena at Hickstead. PC: Craig Payne