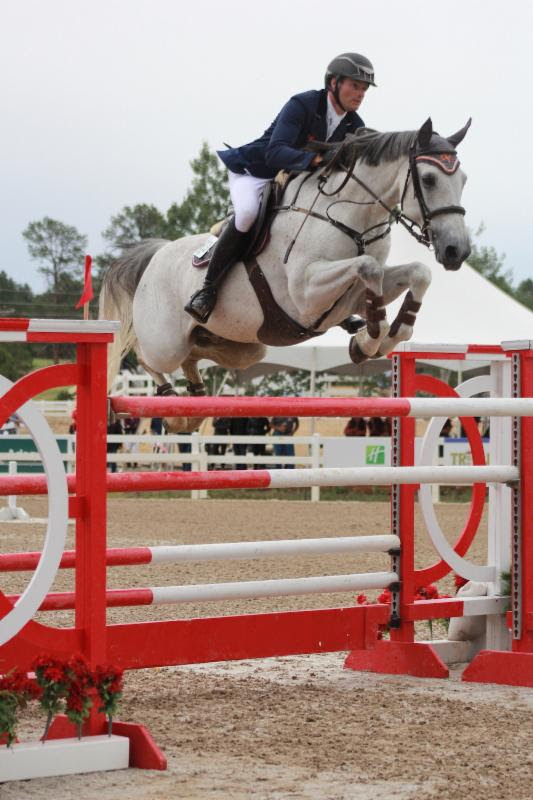 Peter Petschenig and Con Spirit.
Parker, CO – July 18, 2017 – Week six of the Summer In The Rockies Series (SIR) concluded at The Colorado Horse Park (CHP) on Sunday, July 16, after another successful week of top hunter, jumper, and equitation competition. Peter Petschenig of Pilot Point, TX, and Con Spirit were victorious in the highlight class of the week on Saturday, July 15, the $80,000 Front Range Kubota Grand Prix.

“He jumped fantastically tonight. He really stepped up to the plate this show, and I’ve only been riding him for about a month. I’ll have to give him back, as he belongs to my fiancé,” laughed Petschenig. “In the jump-off, I just didn’t try too hard. I tried to stay on the inside track and was lucky enough and fast enough, and at the end of the day, that’s what it came down to.”

Petschenig and the 2006 Westphalian gelding (Con Cento x Utah) owned by Petschenig Showjumping, LLC, rose to the top of the class bosting 28 horse and rider combinations, and ended the night with a victory after a jump off time of 53.736 seconds.

Petschenig took over the ride for his fiancé, show jumper Nathalie Cooper, who is expecting a baby in August. He explained, “Nathalie bought him when he was a six-year-old she rode him up to grand prix. I’ve taken over the ride until she gets back in the tack. We started out together at the end of HITS Thermal and we had a little bit of trouble finding our rhythm when starting out. We are doing good now though and I am looking forward to the next couple of shows that I have with him.”
Petschenig and Con Spirit, known as “Henry” in the barn, will take a brief break in August before continuing on to contest the Longines FEI World Cup™ North American League West Coast competitions through the rest of the fall season.
“We will have a little break when the baby comes in August,” said Petschenig. “Then we are going to go on the FEI World Cup™ Tour on the West Coast with Sacramento, Del Mar and Las Vegas. We will see how Sacramento goes and if I have a good horse then maybe I can send it on to more of the FEI World Cup™ classes Canada and go from there. I will take it step by step, but he is jumping great. Maybe he is a championship horse. We’ll find out.”

Karl Cook of Rancho Sante Fe, CA, slid into second place after completing the jump-off in 55.515 seconds and a single time fault, with Tembla, owned by Signe Ostby. Third place was captured by Kelli Cruciotti of Elizabeth, CO, and Serenity Farm’s Haylie Van De Groenendijk, with a jump-off time of 56.036 seconds, adding two time faults to their jump-off time.

Of her mount, Porter commented, “He was sent to me to ride and sell, so I’m honored to have him. He’s amazingly fun to ride and he wins at least one class at almost every show that he goes to. He’s successful and talented.”

The duo dashed through the short course to best a competitive jump-off, which saw sixteen other entries contest the track and nearly 30 entries take to the first round of competition. Porter and Commissario were the only pair to finish the class with a double clear effort.

“I really liked the class. I thought it was fun. I worked a little hard too. I had four horses in it and they all jumped great,” explained Porter. “That horse has a really big stride, so the jump-off really suited him. He loves to gallop, so you can gallop just as fast as you want and he is still super careful. His stride is very deceiving because it’s a lot bigger than it looks.”

This is Porter’s first time back at CHP in a few years and she praised the venue and its updates. She elaborated, “My guys love the footing here,” she said. “It’s been a wonderful change. We didn’t come last year. We haven’t been here since all of the new updates and everything is great. It felt like you could just gallop, jump, turn, do whatever you need to do, easily. It is really nice to ride on.”

The $5,000 Jumper Derby saw a victory for Annabella Sanchez of Glencoe, IL, aboard her own Zersina, who bested fourteen rides in the class. Second place honors were presented to Michael Tokaruk of Germantown, TN, and Umano De La Ruche, owned by Ilan Ferder. Rounding out the top three was Madeline Thatcher of Bluffdale, UT, piloting Hannah, owned by Pony Lane Farm.

The $2,000 Holiday Inn Parker Low Children’s Jumper Classic was won by Lauren McCaulley of Medina, MN, and her own Will O’ Wisp, completing the jump-off in 41.223 seconds. Elizabeth Simpson of Parker, CO, slid into second place after the jump-off with 44.11 seconds, aboard Powder Day, owned by Lusa Olle. Third place was awarded to Grace Platt of Weatherford, TX, and Sheishof’s Gloria, owned by October Hill Hunters and Jumpers, after a jump-off time of 46.068 seconds.

The $4,000 Voltaire Designs Modified Junior/Amateur Owner Jumper Classic was won by Emily Thomas of Dallas, TX, riding I-Mai Tai OHF, owned by Thomas, with a jump-off time of 43.701 seconds. Second place saw Kara Kahn of Bucyrus, KS, riding Sportsfield Eterina, complete the jump-off in 44.473 seconds to finish in the top two. Third place went to Devon Eret of Aurora, CO, aboard Cabriolet, after a jump-off round that stopped the timers in 46.787 seconds.

The $4,000 Osphos® NAL/WIHS Children’s Jumper Classic was won by Stephany McConnell of Littleton, CO, riding Leon D’Or, owned by James McConnell. The pair completed the jump-off track in 36.295 seconds to secure the win. Second place was awarded to Sophia Vaughan of Scottsdale, AZ, and Joey, owned by Vaughan, with a jump-off time of 37.359 seconds. Cecily Coors of Parker, CO, placed third on Manito Calissanne Z, owned by KC Sports, LLC, with a jump-off time of 38.229 seconds.

John Tredennick of, Denver, CO, won the $2,000 Holiday Inn Parker Low Adult Jumper Classic with his own Glory B IV, after stopping the jump-off timers at 47.012 seconds. Second place was won by Christopher Paris of Billings, MT, aboard Correggia, owned by Paris, finishing with a jump-off time of 47.409 seconds. Laura Pietrzak of Basalt, CO, took third place with Loughnatousa, owned by Pietrzak, with a jump-off time of 44.987 seconds and an additional four faults.

The $4,000 Osphos® NAL/WIHS Adult Jumper Classic was won by Katie Hendrickson of Byers, CO, aboard Atlanta. The pair completed the jump-off track in 36.353 seconds to secure the win. Second place was awarded to Claire Shafran of Leawood, KS, and Cassia Liberty, owned by Maarten Huygens, with a jump-off time of 36.608 seconds. Alex Turner of Cordova, TN, placed third with a jump-off time of 37.618 seconds aboard Vanrock, owned by Turner.

The $5,000 Ariat® NAL Low Junior/Amateur Owner Jumper Classic was won by Annabella Sanchez of Glencoe, IL, and Zersina, owned by Sanchez, with a jump-off time of 42.262 seconds. Second place went to Giavanna Rinaldi of Wayne, IL, aboard Zara, owned by Haylie Rolfe, after finishing the jump-off in 42.847 seconds. Rounding out the third-place position was Madeline Thatcher of Bluffdale, UT, and Hannah, owned by Pony Lane Farm, who completed the short course in 43.521 seconds.

The $5,000 Medium Junior/Amateur Jumper Classic saw a winning jump-off time of 46.991 seconds from Madeline Thatcher of Bluffdale, UT, riding Skilliane De Varnel, owned by Pony Lane Farm. Emma Cullen of Berwyn, PA, and Grandy De Laubry, owned by 3 Seas, LLC, captured second place with a jump-off time of 47.832 seconds ahead of Kay Christine of Thousand Oaks, CA, and Escarlata LS, owned by Christine, who completed the track in 57.234 seconds and added five faults to their score.

On Friday, July 14, Amberlee Wentz of Colorado Springs, CO, earned victory in the $5,000 USHJA National Hunter Derby riding Davidson, a 2011 Warmblood gelding, owned by Dana Vollbracht. Kim Barone of Watertown, MN, rode Easy Street HU, owned by Raven Ridge Farm, to second place in the class with a score of 173.5, while third place honors were awarded to Kelli Cruciotti of Elizabeth, CO, and Darius, owned by Serenity Farm, who finished the class on a 171.75.

Commenting on her win, Wentz said, “On our first trip we were fourth in and he is a little bit of a quiet-minded horse who gets slightly bored in the Pre-Green Division during the week. He likes derby day because things are new and become more interesting. My goal was to go out there and get a nice forward gallop. The course rode great for him. He did everything I asked and jumped in great form. I couldn’t be happier with him.”

Wentz came out of the competition with an overall score of 175, while the derby saw a total of 41 combinations take the first round, one of the biggest derby competitions hosted at CHP this season.

“He’s only six, so I wasn’t going in to the second-round thinking that I was going to be super handy. I think that he did the hand gallop better than a lot of the horses out there today. He just jumped around great. We had a nice trot jump, everything came with a nice forward flow. I’m very happy with the little six-year-old today!”

The $1,000 Mile High Golf Carts Amateur Owner Hunter 3’3″/ 3’6″ Classic saw a top finish for Nicole Lyvere of Denver, CO, and her own Vaillero. Second place was also awarded to Lyvere and her own All In, while Sarah Kullman of Parker, CO, took third place aboard her own Rozario.

Mary Wickman of Des Moines, IA, won the $1,000 Green Hunter Incentive with her own Ciribati. Second place was awarded to Alex Granato of Wellington, FL, and My Everything, owned by Nicole Lyvere. Andrew Barone of Watertown, MN, rounded out the top three finishers aboard Genevieve, owned by Janine Weatherby.

The Rusty Stirrup Hunter Classic saw a win awarded to Heather Chenault of Parker, CO, and her own Collin. Second place went to Crystal Taylor of Sheridan, WY, piloting Fabled Landing, owned by Bart Taylor. Third place was awarded to Stacy Stephens of Denver, CO and Limitless, owned by Stephens.

Molly Swank of Centennial, CO, was the champion of the Pre-Adult Hunter Classic aboard Tango Elite, owned by Swank. Second place went to Christina Green of Denver, CO, and her own Alvin. Third place was presented to Nancy Moore of Parker, CO, and Caran D, owned by Abbygale Funk.

The 2017 Summer In The Rockies Series will resume on Wednesday, July 19, with the start of the seventh and final week of competition. For more information on The Colorado Horse Park, please visit www.coloradohorsepark.com.