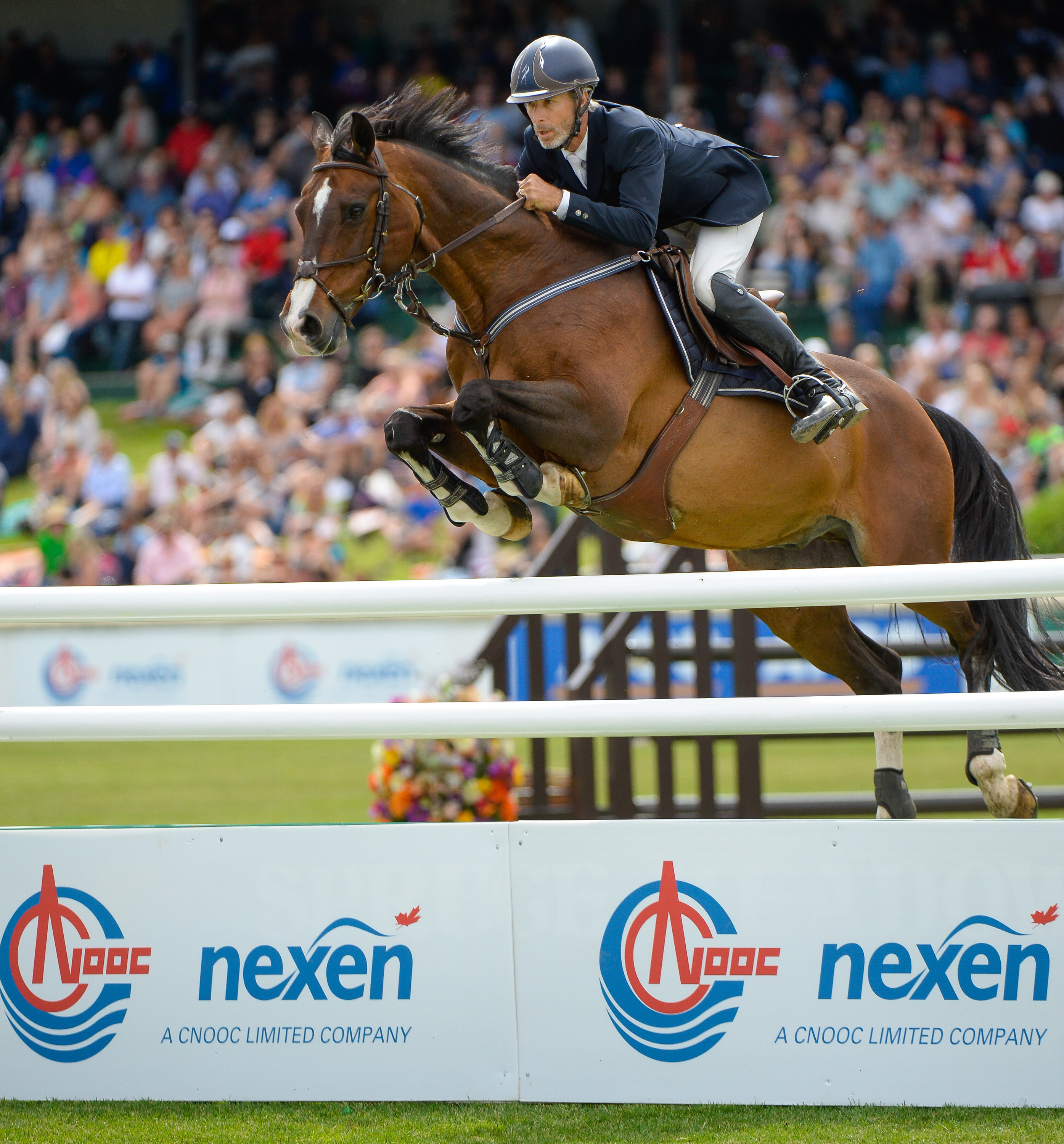 Written by and photos courtesy of Spruce Meadows staff.

The conditions could not have been better for Derby day Sunday at the Spruce Meadows ‘National’ Tournament, presented by ROLEX. The stands were full as fans, corporate partners and many Spruce Meadows first-timers marveled over the magnificence of the horses as athletes from around the globe directed their mounts over one of the most challenging events in Show Jumping.

The course, first designed by the late Pamela Carruthers(UK) and later modified by Course Designer Leopoldo Palacios (VEN) in 2007, is a true test of stamina with 19 obstacles spread across 1,100 meters of the pristine International Ring field. The CNOOC Nexen Cup Derby includes all of the natural elements of the International ring including the Bank measuring five meters in length, a double of liver pools, three-meter open water, table top, dry ditch and devils dyke with three elements set at 1.45m.

Over the history of the ‘National’ Derby there have been two great horse/rider combinations that have successfully scored a true hat trick in winning three times in a row, those show jumping heroes include Ian Millar with Big Ben and Beezie Madden with Judgment. Today we once again saw history made as Richard Spooner(USA) with the 19 year-old Cristallo added themselves to this roster.

When asked what had made Cristallo such a great derby horse, Spooner remarked, “He fears nothing, he is incredibly brave and he just kind of drags me around – the whole course – I don’t know if you can tell but I’m just saying whoa, asking his to slow down! I always try to go deep in the corners – you know after every jump, it’s like I’m throwing a parachute out the back of a funny car to try and get some drag to actually slow us down,” he laughed. “He is an incredible animal – maybe once or twice now I’ve been lucky but he really is a once in a life time kind of horse.”

The second place finisher was no stranger to the Spruce Meadows Summer Series, but a newcomer to the medal podium of the International Ring. Luis Alejandro Plascencia (MEX) aboard his horse Salamera De La Nutria. Luis had competed in the Spruce Meadows derbys before but never on this 11 year-old Selle Francais Mare.

Placencia, excited with his top finish, mentioned, “I have competed in the derby five times now – but because it was the first time on this mare, I was very surprised to be second. I knew she was brave, but sometimes in the derby they just don’t want to go, in many places you just expect them to say no!”, he laughed. “When I saw Richard go I just knew he was going to be clear so I was almost happy because I really didn’t want to have to jump off. You know when I ended up second I was so happy and it was a really – really good day for me.”

Finishing third in the derby after a fantastic week at the ‘National’ was Team Spruce Meadows’ Chris Surbey (CAN). He had two horses entered.  First he rode Artisitic, a bay mare by Chin Chin early.  Surbey commented, “this was her first derby so I was very please with her bravery, a few mistakes, but overall I was happy with the round.”

Later in the order of go was his second mount, the chestnut gelding Carnaval by Chacco Blue. Surbey, enthusiastic about his performance this week said, “I was lucky to have had a really good week and today was just super. Carnaval was fantastic – I mean,when I was walking up to the in-gate Richard was jumping clear so that certainly put the pressure on – jumping clear is a very hard thing to do in the Derby.” Chris commented, “I am normally a bit slow on Carnaval so right from the start I knew I had to get on the time in case I made a mistake I would be further up the line – closer to Richard.”

All in all the fans left the stadium ecstatic with the level of sport they witnessed today, comments could be heard throughout the packed stadium of over 35,500 fans exclaiming, “what an exciting day.” It truly was. ​ 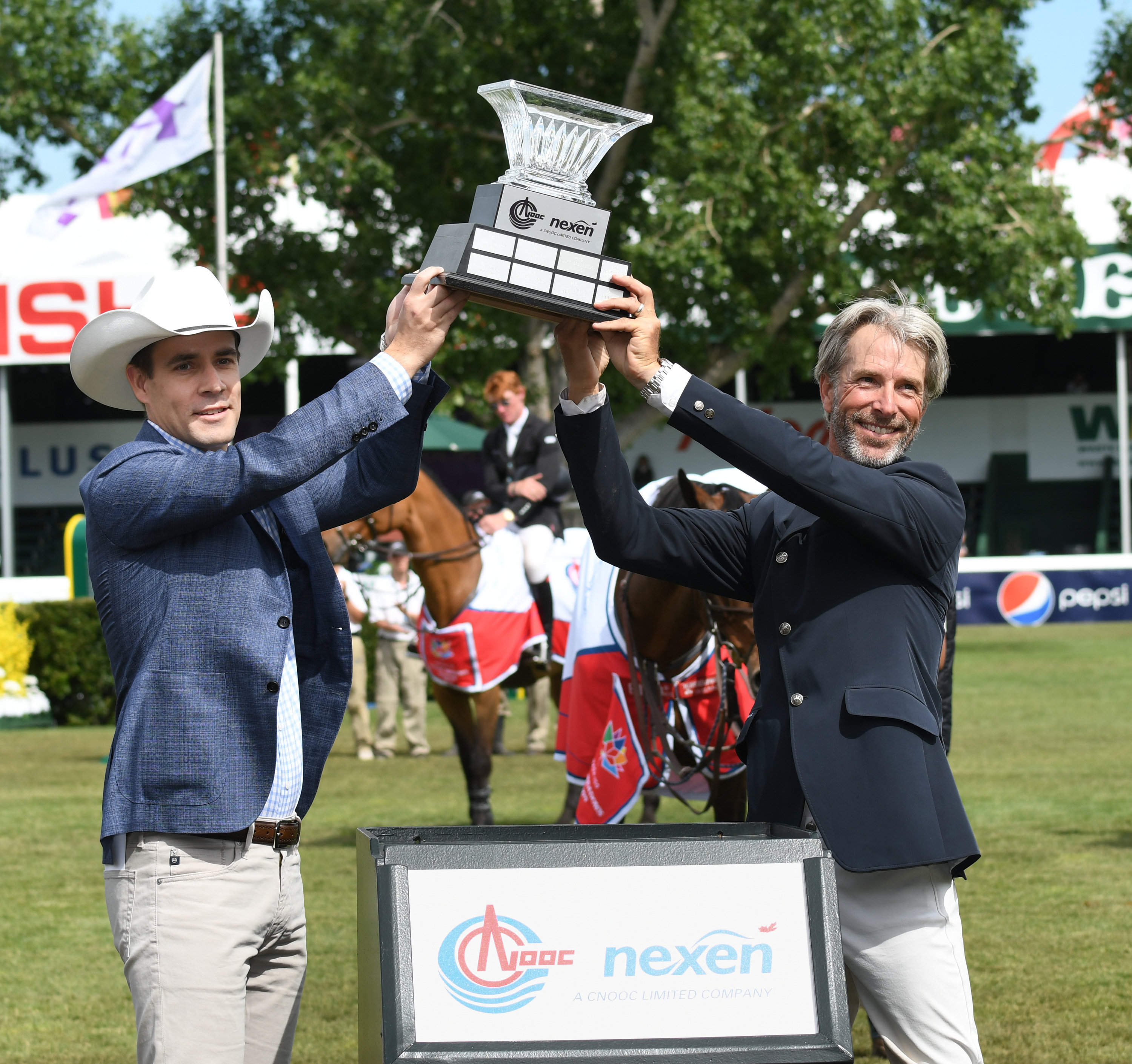