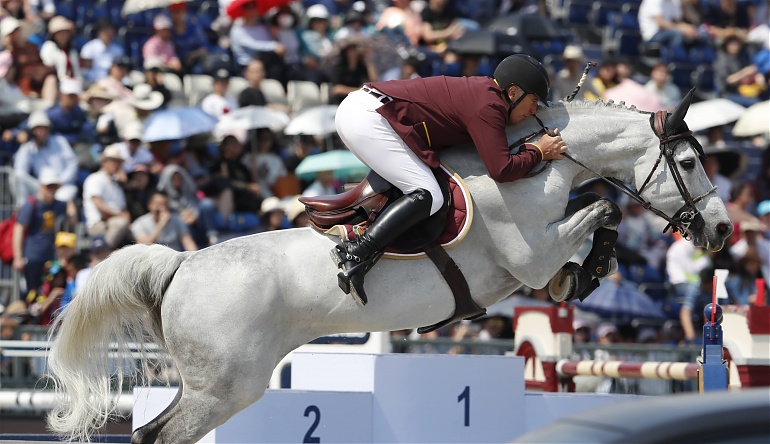 The flying Frenchman Roger-Yves Bost and his stunning horse Pegase du Murier flew to the win in the CSI5* BMW Trophy class, with the top French rider taking home a brand new car and almost 90 thousand euros in prize money. It was a dramatic class in Shanghai, with the world’s best tackling the BMW class that runs congruently with the final round of the Global Champions League, so it gives the riders plenty to think about in the ring. And plenty to do.

Uliano Vezzani’s course was a tough test for the world’s best, featuring formidable oxers, distracting water tray, and delicate verticals. A challenging dog leg back towards the in-gate caught out a few, while others rolled poles in the Longines combination set against the long-side of the arena where the challenge was the short four strides to a big oxer to finish, with a time allowed of 84 seconds.

The first of the related distances also caught out a few, and the majority of the fences at maximum height, including a 1.60m plank, which was very gappy, very light and with no ground line. There was also a serious double away from home, which caught out the likes of Bertram Allen.

There were only 14 clears from the 49 starters, with eliminations and retirements from Abdullah Al Sharbatly, Kimberly Prince and local rider Jacqueline Lai. Ben Maher put in a stunning round with Don Vito, raising the bar for the rest of the field and throwing down a considerable time to beat. Compatriot and fellow Olympic Gold Medalist Scott Brash bettered his time with Hello Annie, eventually finishing in 3rd overall. Top American rider Kent Farrington put in another masterful round with Creedance to finish second, just shy of Bosty’s time, with the fiery chestnut gelding skipping and bucking as he flew around the course.

But it was Bosty’s moment to shine, as the French legend galloped the course, flying to the finish a full second ahead of the rest of the field.