Don’t miss the $75,000 Battle of the Sexes, the first “Saturday Night Lights” event of the 2016 Winter Equestrian Festival.

Wellington, FL – The 2016 Winter Equestrian Festival (WEF) is quickly approaching, and Equestrian Sport Productions (ESP) is gearing up for the first “Saturday Night Lights” event at the Palm Beach International Equestrian Center (PBIEC). The $75,000 Battle of the Sexes, a fan favorite that pits teams of men and women against each other in fierce competition, will be the feature event on Saturday, January 16, during the first week of WEF competition. Held each winter in Wellington, FL, WEF features 12 weeks of world-class competition from January 13 through April 3, awarding more than $9 million in prize money.

The Battle of the Sexes is entertaining for riders and spectators alike. This year the format has been changed for the three-phase contest. The phases now include a faults converted speed round, team relay races, and match races. 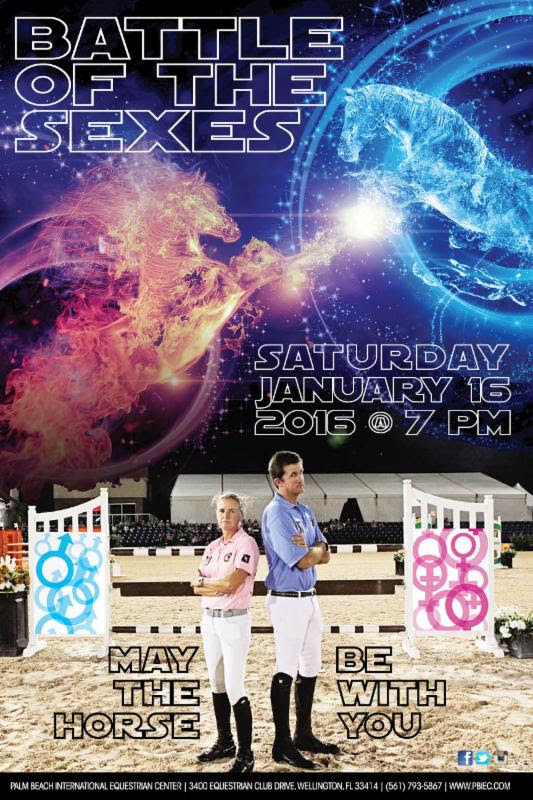 “The Battle of the Sexes is always a fun event for everyone and we thought that after eight years, it would be more interesting to change things up and make it even more exciting for the spectators to watch,” said ESP President Michael Stone.

As always, teams made up of 10 men and 10 women will battle it out for the winning title, each led by a team captain. The women won the competition six years in a row before settling for a tie in 2015. This year they are out for redemption.

Women’s team captain Candice King related, “The Battle of the Sexes is a really fun way to start out the WEF circuit. There is always a big, engaged crowd cheering us on. The new format for this year will make it more exciting and keep everyone on their toes. We can’t wait to show the boys how it’s done again!”

Full class specifications can be found in the WEF Prize List, which can be viewed online HERE.

Any riders interested in participating in this year’s Battle of the Sexes can contact Catie Boone at catieboone@gmail.com.

Don’t miss the first “Saturday Night Lights” event of the season, one that is sure to keep you on the edge of your seat as you cheer for pink or blue!