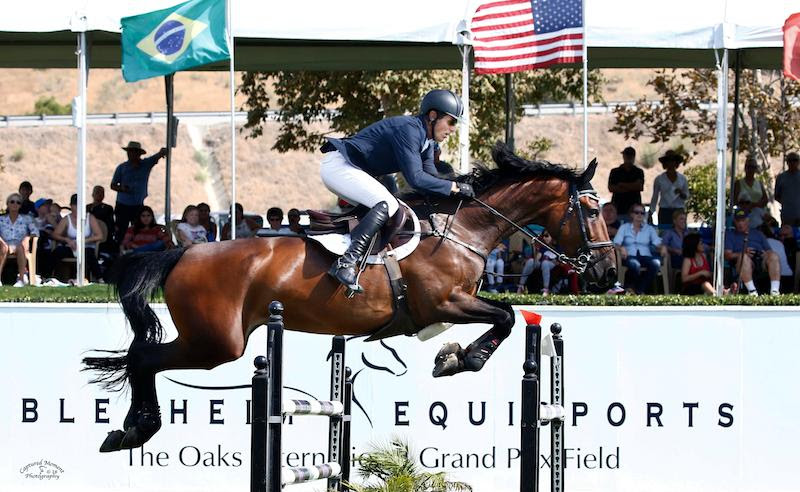 Currently sitting 35th on the list of riders vying for an invitation to the Markel Insurance 1.40m Grand Prix Series Final in Las Vegas, Ikast can compete in up to five more qualifiers this season, four at Blenheim shows, including the next two weeks in Del Mar and two weeks in September in San Juan Capistrano, plus one in his home state of Colorado, to attempt to make the Top 25 and try his luck at The Las Vegas National.  See the standings as of August 20th here.

After eight months as a pair, young professional Zazou Hoffman and Woodpecker de Villars (owned by Woodacres Stables, LLC) picked up an Interactive Mortgage U25 win Sunday. Since the class is run concurrently with the Markel Insurance Grand Prix, Hoffman’s winning U25 effort also earned her third place in the grand prix. 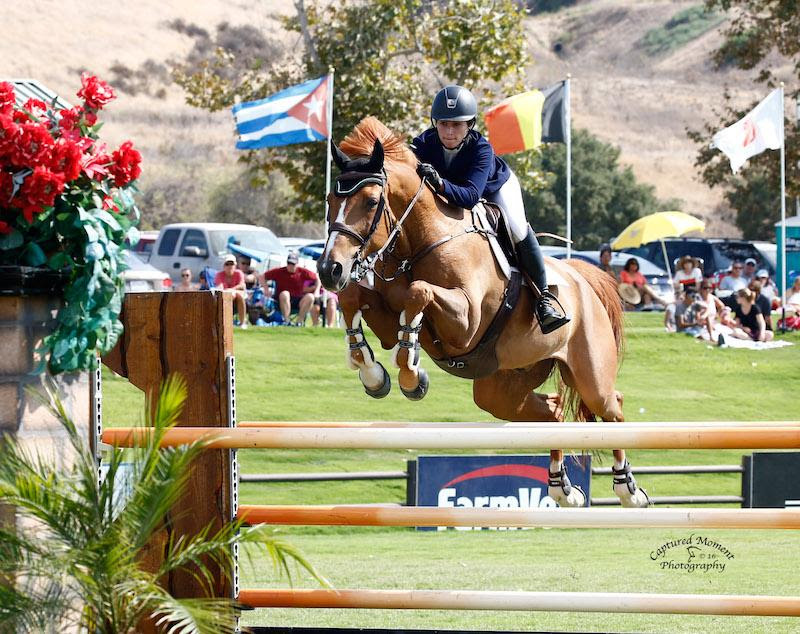 Sunday’s course was crafted by FEI course designer Michel Vaillancourt (CAN), who also designed at the Pan American Games last year in Toronto. Since the highlight class was to be set at the Regional Standard, his aim was to challenge the competitors with a technical course that required a focused ride – one that tested riders’ abilities to shorten and lengthen all within the time allowed.

“It’s a very fair course – I hope. It’s got a couple of interesting questions in it,” Vaillancourt noted. “The triple combination is very delicate in the middle. The liverpool is on a short distance with the white rails. And the second combination comes after a really long line-the distance between the oxers is very long-and then the distance to the verticals [vertical-vertical combination] is very short, and the distance inside is also very short. The second to last fence is very, very skinny, light, light rails, so this one requires you to be very delicate. We’re expecting to see eight to ten clears, and hope we’re going to have a fast jump off.”

Expert that he is, Vaillancourt called it right on the money as ten returned for a jump-off. Class winner Ikast was first in for the jump-off on his other mount, Supernatural.  Picking up four faults at the skinny, they left the door open for a double clean. Lane Clarke and Georgy Maskrey-Segesman’s Balu U had the first double clear performance, setting the time to beat for the group who followed at 39.22. Michelle Kerivan and Colin hustled more in the corners to stop the clock clean in 38.57, taking over the lead.  Several tried to steal that top spot, but Kerivan was untouchable until Ikast returned on his mare. 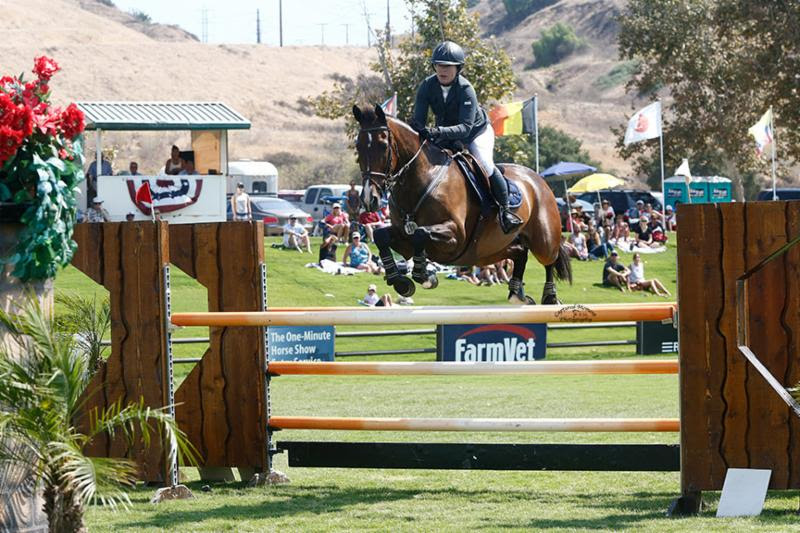 The team galloped up the first line in five strides, kept up the pace on the approach to fence 15, where they caught a perfect angle that enabled them to shoot over to the outside line. Chestina Z’s careful nature, as described by Ikast, allowed her to navigate the short line and combination flawlessly. The same daring ride over the last two fences elevated Ikast to first place with the intimidating time of 37.50 seconds.

“I knew that [the second-to-last jump] was a narrow fence that’s very easy to get down but my mare is very, very careful, so I took a little bit of a chance there and then left a stride out to the last fence and that succeeded. So the rest, they had to come in and chase me,” Ikast said. 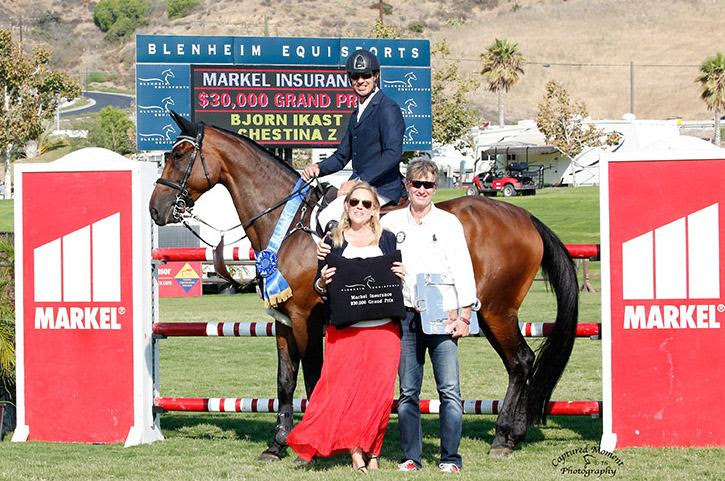 Five of the ten horses in the jump-off were piloted by U25 riders, which led to a competitive timed round. Clean on two horses in the first round, Hoffman had an advantage to seize the win. She set the bar high with Woodpecker de Villars, racing through the timers in 38.91 and no faults. Vani Khosla and Billy Mexico finished with an impressive time of 37.46, but accumulated four faults at the tricky second-to-last skinny fence. 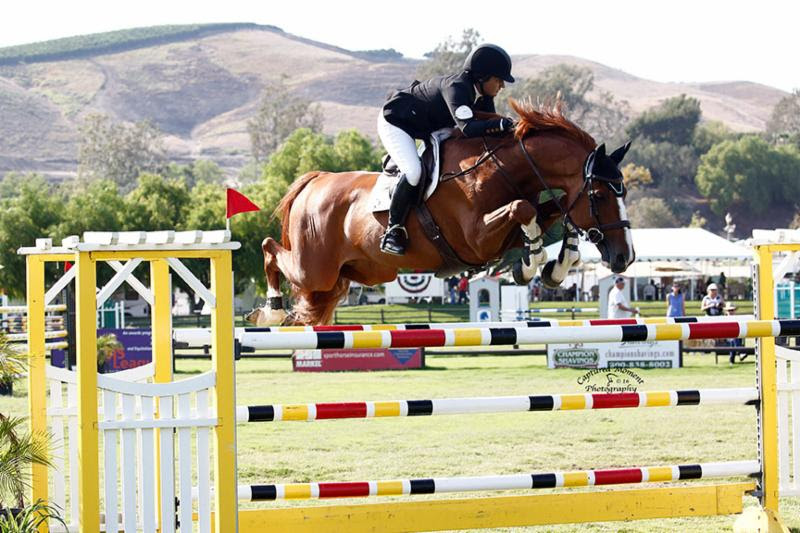 “Woody and I don’t have a ton of experience yet in fast jump-offs, so I wanted to push myself a little bit to go faster but yet still place my horse at the jumps in a way that kept him comfortable and confident,” Hoffman said.

As a young professional at Meadow Grove Farm, she noted that she was lucky to have the opportunity to show several horses in this class and plans to continue at this level in the fall season. As a testament to Hoffman’s journey as an up-and-coming professional, she was awarded the North American Riders Group Grant earlier this year, which helps to subsidize her grand prix goals.

Hoffman feels that California-based developing riders are evolving based on the success of the U25 competitors from Sunday, and would like to see this trend continue with more classes focused on this level. The $25,000 Interactive Mortgage U25 Series Final will be held at The Las Vegas National in November; view the standings as of August 20th here. 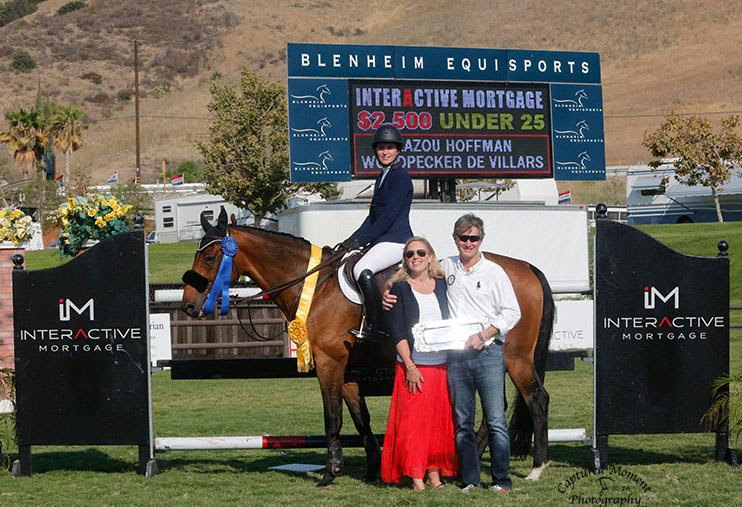 Highlights for this week’s upcoming Showpark Summer Classic include the 2016 CPHA Foundation Equitation Championships, the final qualifier for the Interactive Mortgage Horses 10 & Under Futurity,  one of the five remaining Markel Insurance 1.40m Grand Prix Series qualifiers and the $50,000 Grand Prix of Showpark.