Ottawa, Ontario – Canadian Olympian Beth Underhill of Schomberg, ON and Count Me In won the $100,000 CSI2* Classic to close out the second annual CSI2* Ottawa International Horse Show on Sunday, July 24, in Ottawa, ON.

In a thrilling conclusion to two weeks of world-class show jumping competition at Wesley Clover Parks, Underhill topped a 19-horse starting field in dramatic fashion to claim victory in the $100,000 CSI2* Classic.  The packed crowd was treated to a spectacular day of sport, as 15 riders were clear over the first round track set by 2016 Rio Olympic course designer Guilherme Jorge, setting the stage for a jump-off where speed became the name of the game. 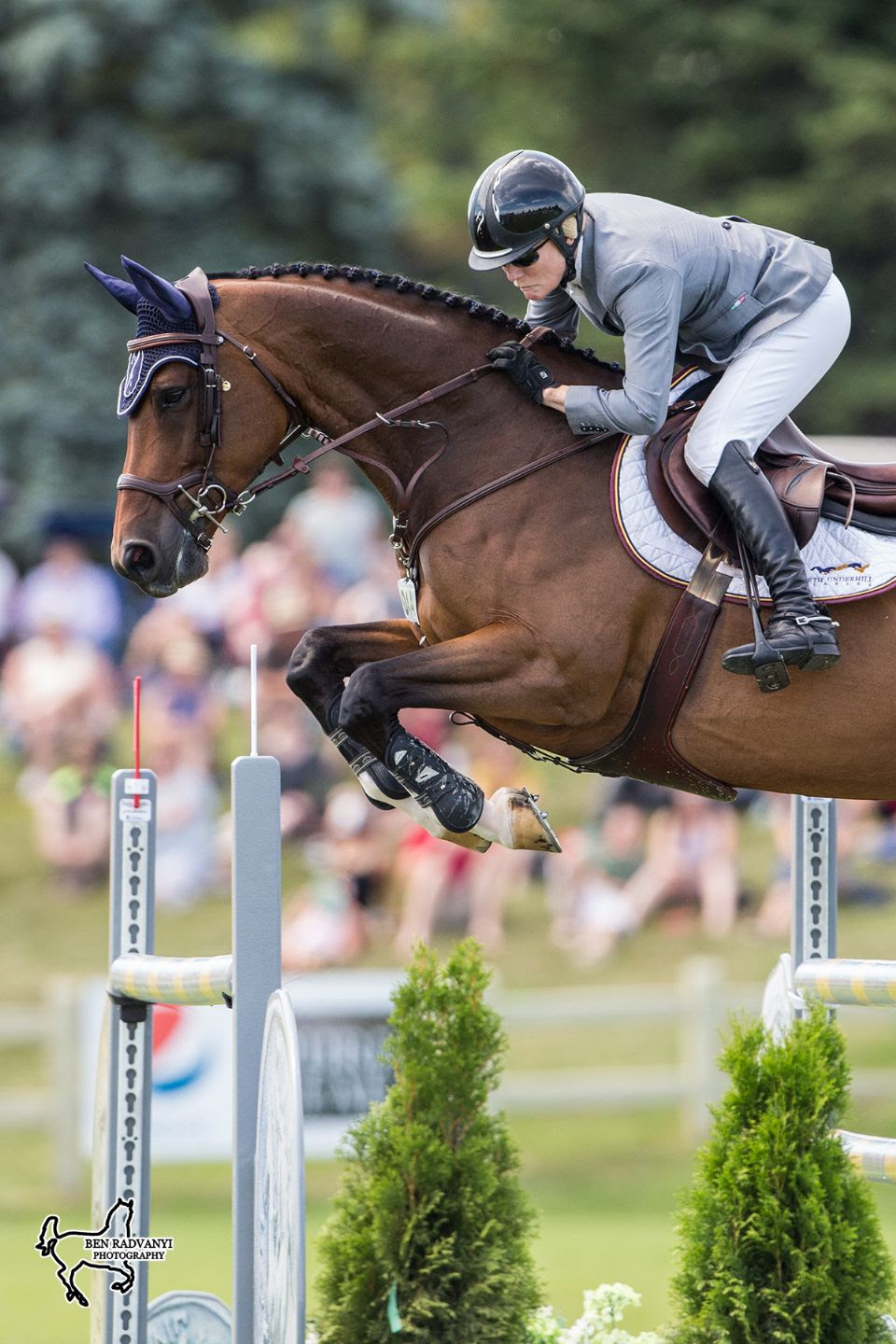 Beth Underhill of Schomberg, ON, and Count Me In won the $100,000 CSI2* Classic on Sunday, July 24,
to conclude the CSI2* Ottawa International Horse Show at Wesley Clover Parks in Ottawa, ON.
Photo by Ben Radvanyi Photography

As the fifth of 15 riders to return for the jump-off, Underhill laid it on the line riding the aptly named Count Me In, jumping clear in a time of 38.42 seconds to move to the top of the leaderboard.  There were still 10 challengers to follow but, try as they might, none threatened Underhill’s time.  Finland’s Nina Fagerstrom and Flower, the winners of Friday’s $35,000 CSI2* Brookstreet Hotel Open Welcome, finished second, having stopped the clock in 38.67 seconds before Underhill took to the expansive grass grand prix field.

Jonathon Millar of Perth, ON, qualified two mounts for the jump-off, placing third riding Daveau and fourth with Bonzay with times of 40.47 seconds and 40.72 seconds respectively.  Quincy Hayes of Aurora, ON, rounded out the top five with a time of 41.33 seconds riding Calgary 56, owned by her mother, Darcy Hayes. Finland’s Nina Fagerstrom and Flower finished as the runner-ups in the $100,000 CSI2* Classic
at the CSI2* Ottawa International Horse Show. Photo by Ben Radvanyi Photography

“I was fortunate that Nina Fagerstrom, who is extremely fast, went ahead of me, and I had the opportunity to watch her,” said Underhill, who represented Canada at the 1992 Barcelona Olympic Games with the great Monopoly.  “When I watched her I thought, ‘I don’t even know if that’s beatable’.  She really laid it down.  There was not really anywhere that I was thinking I could shave off a corner or leave out a stride.  She did everything by the book.  So I knew I just needed to go in there and hope my horse could be a little bit quicker.  I just caught her by the blink of an eye.  It was that fast.

“It was a really exciting jump-off for the crowd,” continued Underhill, who picked up the winner’s share of $25,000 in prize money.  “It went quickly, and there was a lot of action.” 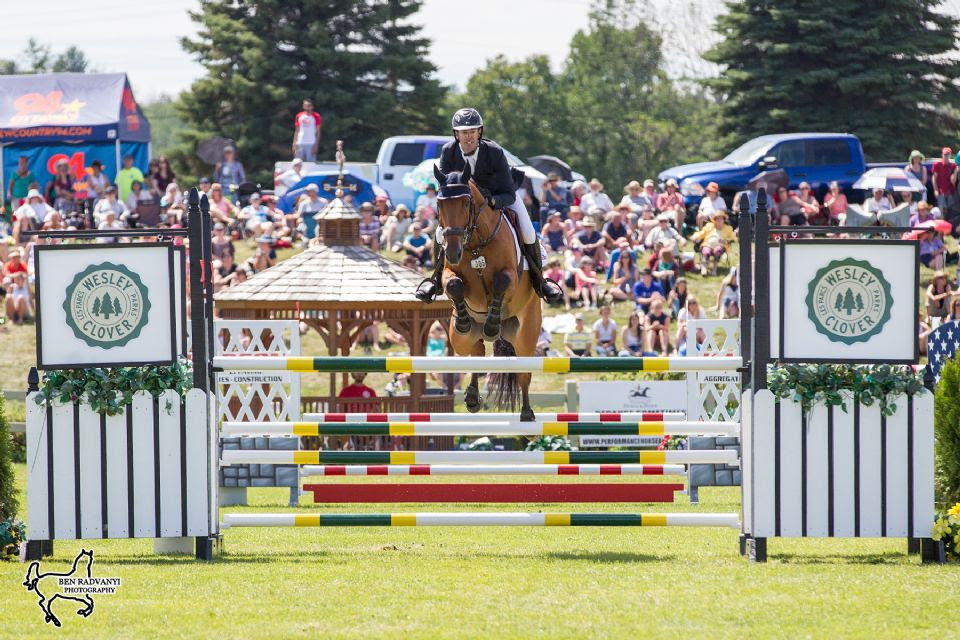 Jonathon Millar of Perth, ON, placed third riding Daveau (pictured) and fourth with Bonzay in the
$100,000 CSI2* Classic at the CSI2* Ottawa International Horse Show. Photo by Ben Radvanyi Photography

Underhill has had the ride on her winning mount, Count Me In, for three years.  Now nine, the Hanoverian gelding (Count Grannus x Sherlock Holmes) owned by Sandy Lupton and Robb Caswell has come into his own in the past six months.

“He started as a very green, inexperienced horse,” said Underhill of Count Me In.  “He was always very careful and had a super attitude, but he was always a little bit feisty and a real competitor.  It was just a matter of managing his skills so that he stayed a little bit more focused on the job.  In the past six months, he’s really put everything together and has just been a wonderfully competitive horse for me.

“He’s naturally a very fast horse across the ground, so I knew I had a good shot in the jump-off if we left the jumps up,” continued Underhill.  “I think he was rub-free the entire day, and I couldn’t be more thrilled with his progress this past year.  I’m just so thrilled to have him to ride.”

Underhill’s victory in Sunday’s $100,000 CSI2* Classic marked the grand finale of the Ottawa International Horse Show.  This is the second year that the event was managed by the Wesley Clover Parks organizing committee, led by Karen Sparks.  The show jumping tournament has seen many incarnations over the years, and both the equestrian and the local communities are thrilled to have world-class show jumping competition back in the heart of the Nation’s Capital.

“I was here at the very beginning,” said Underhill, 53.  “We used to have our Olympic team selection trials here back in the day.  We used to compete here, and it was on our tour every summer.  It was really sad for all of us when the show kind of fell by the wayside.  We were all really excited to see Karen Sparks and her whole team put it back together and back on the map as it should be.  All of the riders enjoyed their two weeks here.  The horses jumped great here, and they had great course designers in Guilherme and Michel Vaillancourt last week.  It doesn’t get any better.  This is modern show jumping, and we’re glad that it’s back.” Beth Underhill and Count Me In celebrate with the crowd as they take their victory gallop following
the $100,000 CSI2* Classic at Wesley Clover Parks in Ottawa, ON. Photo by Ben Radvanyi Photography