Towell rode Cadence in the morning’s speed class to prepare the horse for his owner, Jennifer Gates, to show later in the week. The 16-year-old Swedish Warmblood gelding (Cardento x Irco Marco 662) will compete with Gates in the Hollow Creek Farm Under 25 Grand Prix Series this winter, which begins with its first event on Sunday.

“Jen had not shown for a little bit because she was studying abroad, so Cadence had some time off, and then we just brought him back,” Towell explained. “I showed him last week and he feels great. He likes being down here. He is happy here, and he knows the routine. He feels the best he has ever felt, so hopefully she will have a good season on him.” 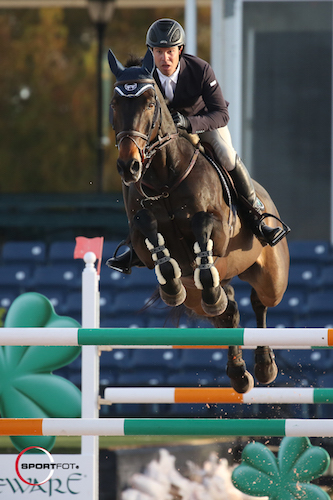 Speaking about his winning round on Wednesday, Towell stated, “It was a nice first day track. The Under 25 on Sunday is a speed class, so I wanted to go a little bit so he would be ready for Jen. It was nice because he was really smooth. He has such a big stride and he turns so well that I actually felt like I had a nice, efficient round, but did not have to go too fast.”

Towell has a busy circuit ahead, with many horses to show for Gates, as well as a full schedule training his star pupil.

Also competing in the International Arena on Wednesday, the $6,000 Illustrated Properties 1.40 FEI speed class was held in a California Split with 107 entries. Ramiro Quintana (ARG) was the winner in Section A riding Michael Smith and Randall Hogan’s Glasgow de Muze, while Shane Sweetnam (IRL) and The ISB Group’s Beezie took top honors in Section B.