Michelle Parker and Doriena Make it a Double in the $7,500 Interactive Mortgage Futurity Qualifier

August 27, 2016 – Del Mar, CA – Of the three horses that Mexico’s Jaime Azcarraga entered in today’s grand prix, two of them continued on to the jump-off and one finished with just four faults. Each a beautiful bay color, it was Anton that Azcarraga rode for the win in the $50,000 Grand Prix of Showpark. Toulonia finished second, and Matador, with one rail, picked up the ninth place ribbon. 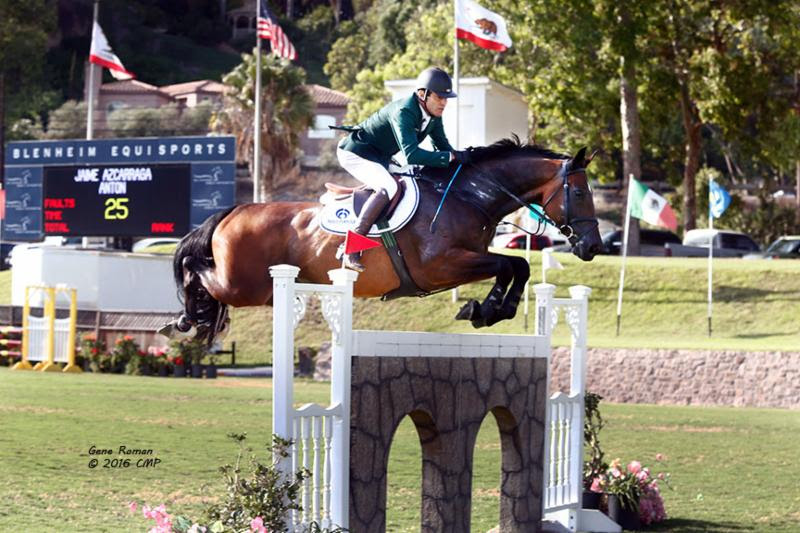 “Today I’m taking into consideration that some of my riders have greener horses, and there are some greener riders, so that’s why, as far as the National Standard goes, I just met the level, I didn’t go on the strong side of it,” FEI Course Designer Anthony D’Ambrosio (US) said of his 1.50m track. “I have a liverpool-oxer with the wall after a short distance, which could factor in. The triple combination (7abc) is not  a scopey triple, but a gymnastic triple; the horses have to be soft and relaxed when they get there, and be careful. In this next line, (9-10ab-11) with a steady seven or a really flat six to this vertical coming in, then forward one, and then afterwards, a six that you can do different ways.”

Rails fell throughout the course for the twenty-five entries. Challenging exactly where D’Ambrosio indicated, one of the three elements of the triple came down thirteen times and the careful double also caused thirteen rails to fall. However, four returned for the jump-off. 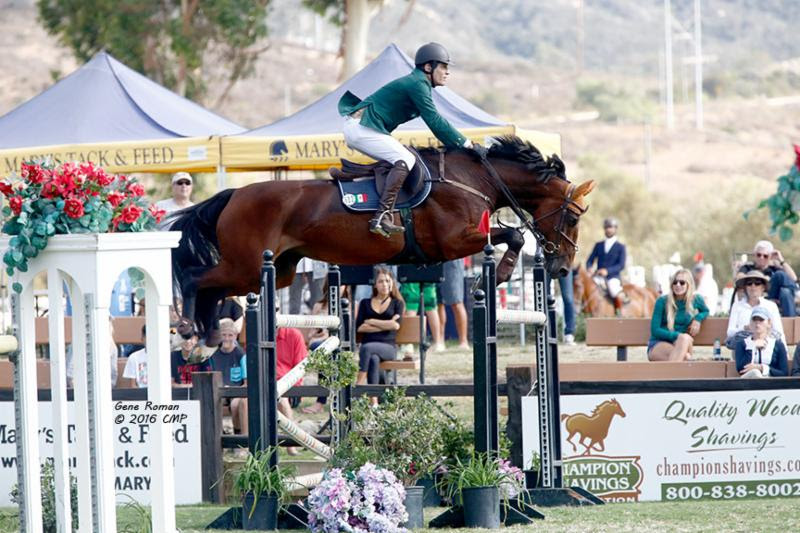 Azcarraga was first to return on Toulonia. Looking to set the pace, the pair had one rail coming into the 7ab combination towards the end, finishing with four faults in 46.30 seconds. Next up was Mandy Porter aboard Milano (owned by Abigail Weese), who mirrored Toulonia with a rail at 7a, for four faults in a time of 46.66 seconds. 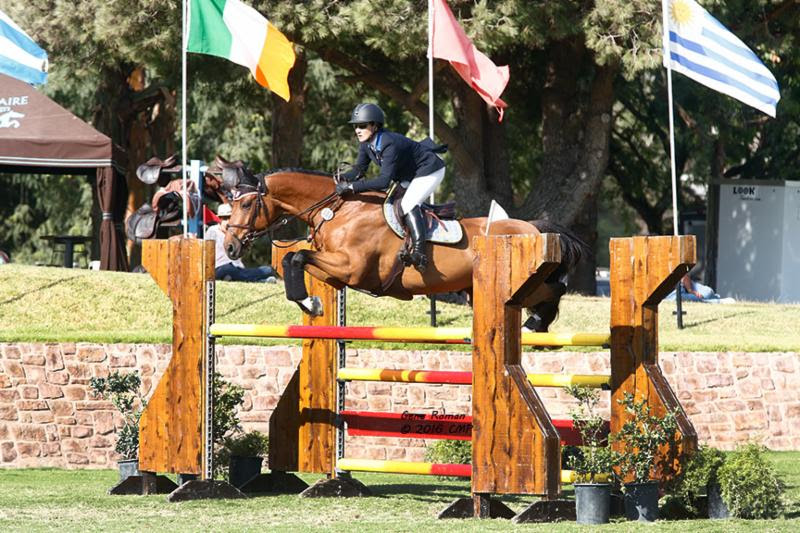 Azcarraga knew what had to be done to navigate his next mount to a clean ride. On a steady yet smooth track, he succeeded with a double clean ride in 51.10 seconds. Young professional and U25 rider, Zazou Hoffman was going for the win on Dogwood Hill, LLC’s Samson II. Leaving a stride out in the last line, she flew down to the final jump, but unfortunately had a rail, for another four fault score in 48.30.

Azcarraga spoke about the course and his two horses. “I think it was a nice, very technical course. Anthony always builds like that. It was not a killer height, but always very technical to ride,” he said. “This is only my third show with Toulonia, so we’re just getting to know each other. Anton has been with me for about five years. He was injured last year in Vienna at the Global Champions [Tour], so the last show here at Showpark was his first show in nine months. I’m happy he feels good and I’m happy to be here.”

He plans to stay in the States just a little longer. “I’m going to show next week and then unfortunately I have to go back to Mexico and work a bit,” Azcarraga said with a laugh. 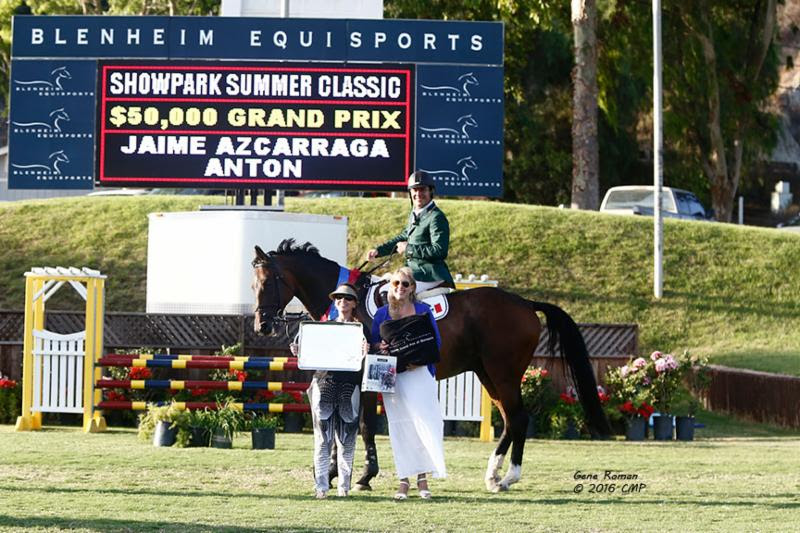 Jaime Azcarraga with his wife, Regina, and Melissa Brandes of Blenheim EquiSports

Michelle Parker hit a trifecta today when she picked up her third consecutive classic win. On Thursday, she sat on Cupilor in the victory gallop for the Markel Insurance 1.40m Grand Prix. And today in the final $7,500 Interactive Mortgage Futurity 10&U Series qualifier, she piloted the eight-year-old Doriena (owned by Idyllic Imports) to the top spot, as well as another win earlier on Eureka in the 7 Year Old Classic. 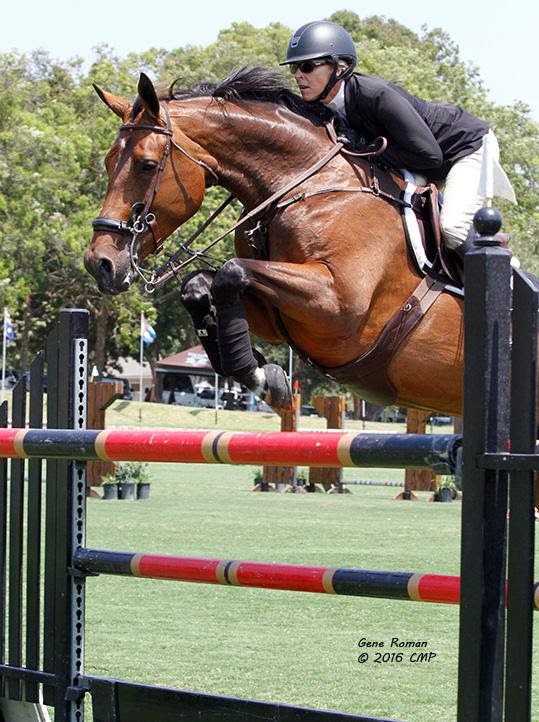 To prepare the young futurity horses for the upcoming final, D’Ambrosio set a track that started at 1.35m and finished at 1.40m, including three double combinations. In a class of 15, two advanced to the jump-off. The first of the two, Everardo Hegewisch and Ircos IV, had four faults at the second to last obstacle, leaving the second pair the opportunity to go double clean for the win. With Parker in the irons, Doriena did exactly that and the rider secured a position in the top 20 for the Interactive Mortgage 10&U Futurity rider standings.

“I just started riding her recently, this is our second show together. She is a big, powerful mare and I quite enjoy her. We are beginning to be a team already,” Parker said. Showing a lot of promise, Parker plans on competing Doriena in the $20,000 Interactive Futurity 10&U Final next week at the Showpark All Seasons Summer Tournament, and then move the mare up to the grand prix division.

Tomorrow will conclude the three divisions of the 2016 CPHA Foundation Equitation Championships: 22 & Over, 14 & Under and 21 & Under. Next week, the action continues with the Showpark All Seasons Summer Tournament. One of two shows during the season that focuses on the young horses, hunter highlights include the Sallie B. Wheeler/USEF National Hunter Breeding Championship. Jumper highlights abound with the $45,000 Young Jumper Championships (YJC) West Coast Finals, the $20,000 Interactive Mortgage Horses 10&U Futurity Final, a $25,000 Markel Insurance Grand Prix Series Qualifier as well as an Interactive Mortgage U25 Developing Rider Series qualifier, plus the $50,000 Showpark All Seasons Grand Prix.