The ninth week of WEF features CSI 5*/2* competition at the Palm Beach International Equestrian Center (PBIEC) on March 8-12, 2017. Highlights include the $380,000 Douglas Elliman Grand Prix CSI 5*, presented by The Bainbridge Companies, on Saturday night and the $86,000 Suncast® 1.50m Championship Jumper Classic and $50,000 Grand Prix CSI 2* on Sunday. The 12-week WEF circuit continues through April 2, 2017, awarding over $9 million in prize money.

“I thought the first round was actually pretty tricky. At the beginning we didn’t see so many clears,” Polle said after her win. “The jump-off was really fun. For Wings, it really suited him well because you could get a gallop and try to cruise through, and just watch the verticals. There were two places where I was able to leave out strides, which I think really helped me.

“I was a little long at the last fence, but I went for it,” Polle continued. “Wings has so much range that he can do that. That is where I have to be a little quicker sometimes because he has a big stride, but he is not a quick, quick horse, so to make up that time I need to do the leave outs.” 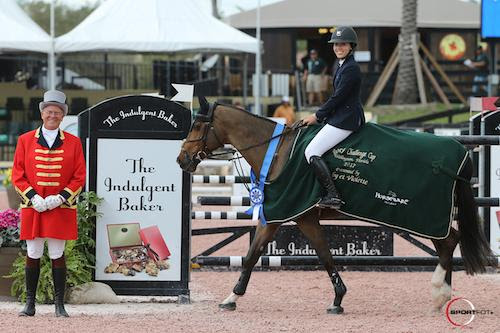 Karen Polle and With Wings in their winning presentation with Steve Rector.

Polle began training with Olympic gold medalist Rodrigo Pessoa in October, but also had her longtime experience riding With Wings to her advantage.

“Last month was seven years that I have had him,” Polle noted. “I think that is one of the most special things, to have a horse that you start really young. I started in the Low Junior Jumpers with him, and then we worked our way up to the five-star level. I think that makes our partnership even more special because we have known each other for so long. We trust each other a lot because we have been through everything together. It is very rare, so I am really lucky.”

Eduardo Menezes (BRA) and Quintol finished fifth in 39.30 seconds, and Pablo Barrios (VEN) riding A S D Farfala placed sixth in 39.54. Kent Farrington (USA) completed the fastest time in 35.54 seconds with his own and Robin Parksy’s Gazelle, but had a rail at the final fence to place seventh. 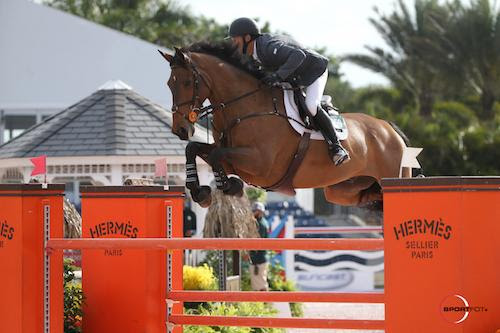