Course designer Anthony D’Ambrosio (USA) saw 56 starters on his first round course, with 14 advancing to the jump-off and six clear over the short track. Farrington and Creedance took the win with a time of 33.92 seconds.
Ireland’s Conor Swail guided Finca Horses’ Flower to second place in 34.14 seconds. Japan’s Karen Polle jumped With Wings into third place with a time of 34.24 seconds. USA’s Lauren Hough was aboard Laura and Meredith Mateo’s Waterford to finish fourth in 34.52 seconds. Marilyn Little (USA) and Karen O’Connor’s Clearwater placed fifth in 34.66 seconds, and Margie Engle (USA) rounded out the top six with a time of 37.96 seconds riding Gladewinds Partners’ Royce.
For his win on Thursday, Farrington stuck to his own strategy with the speedy mount and made time with quick, tight turns.
“I watched a couple go early in the jump-off just to be sure about my plan, but he is very fast by himself, so I have to stick to his routine,” Farrington noted. “I can’t try to do stride numbers that other horses do. I have to win on short turns and using his foot speed.”
Farrington continued, “I think the horse is naturally quick, and I naturally ride pretty quick. I did one extra stride to the oxer before the rollback turn. That probably made it easier to rollback shorter, and he is fast enough to do that. A slower horse, if they add a stride there, they are going to be two seconds behind, so I think a smaller, quicker horse has the advantage on a rollback like that.” 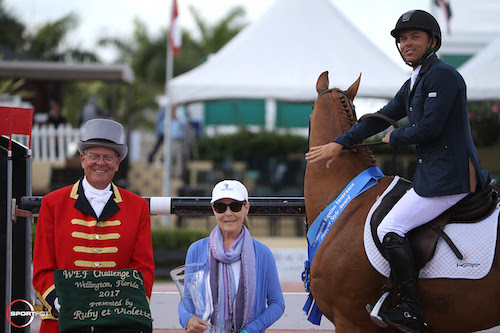 Kent Farrington and Creedance in their winning presentation with ringmaster Steve Rector and Laura Fetterman of Champion Equine Insurance. PC: Sportfot
“It is a big week here; a five-star week in Florida,” Farrington said after his win. “I have been bringing Creedance up slow, and this is his first five-star show here. We are off to a great start. He jumped last week under the lights in the small ring, and I thought he was a bit rusty. He came out in much better form today, so I am happy with his progress, if nothing else.”
The ten-year-old Dutch Warmblood gelding (Lord Z x Notaris) won two five-star grand prixs in St. Moritz and Geneva, Switzerland, in 2016, among other top finishes at a young age. He will next contest Saturday night’s $380,000 Suncast® Grand Prix CSI 5*.
Along with the winning prize, Creedance was presented the Champion Equine Insurance Jumper Style Award for week seven, presented by Laura Fetterman.
Week Seven Challenge Cup Top 15: