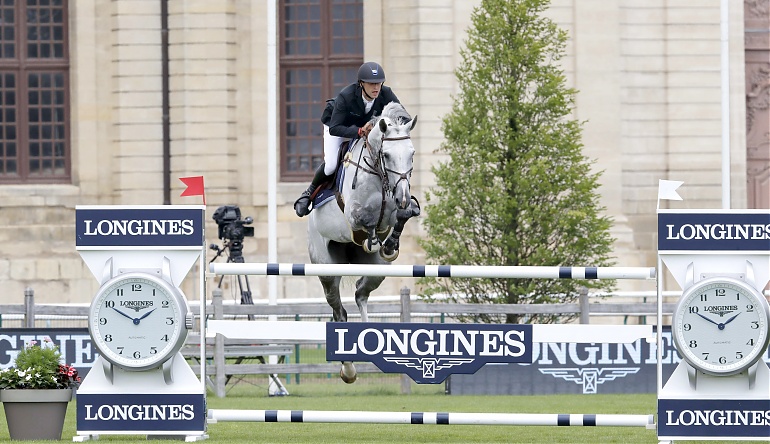 The Longines Global Champions Tour of Chantilly weekend kicked off in style under the quiet gaze of the magnificent Chateau de Chantilly. A formidable seven out of the top ten riders in the world took to the foot-perfect grass arena, for the first round of action in the three day festival of show jumping.

Uliano Vezzani’s first course of the weekend was best suited to forward-going horses, with galloping distances and plenty of options for the world’s best riders.

One of the early riders to go, Pieter Devos (BEL) with the grey Haloubet Hitchcock, was the first to really set the pace, stopping the clock clear in 60.03s, a full five seconds ahead of the rest of the field after a smooth and speedy round. Jérôme Guery (BEL) chased after his compatriot with Papillon Z, eating up the distances as the grey horse opened up to the fences, but the speed cost them a fence, with the pair picking up four faults and out of the top results.

A couple were caught out by the time allowed, with Christian Ahlmann (GER) and Codex One, and Marcus Ehning (GER) with Comme Il Faut keeping a foot off the gas, saving their top horses for the weekend to come. Lorenzo de Luca (ITA) and Armitages Boy had the first fence down, an imposing oxer, with the bay horse fresh and ready, skipping and bucking his way around the arena.

But it was Pieter Devos who stole the opening class, keeping his long term lead to take the first win of the weekend. Second went to Bassem Hassan Mohammed (QAT) with Argelith Squid, and third to local rider Benoit Cernin (FRA) and Tea Star d’Oyale.

There is plenty of top sport yet to come this weekend, and with tidy clears from World Number 1 Kent Farrington (USA) and Dublin, Simon Delestre (FRA) and Opium du Soufflet CH, John Whitaker (GBR) with Crumley, Scott Brash (GBR) and Hello Forever, Lauren Hough (USA) with Adare and Philippe Rozier (FRA) with Quartz Rouge, it’s set to be a battle of the best in front of the stunning Chateau Stables.

The first round of the Global Champions League will kick off at 16:30 local time, with all the content streamed live on GCL TV.