January 29, 2017 – Wellington, FL – On Sunday morning, Sophie Gochman of Palm Beach, FL, captured both the championship and reserve honors in the Small Junior Hunters 15 & Under. She rode Dominik to the champion title and Mythical to reserve. Both horses are owned by Gochman Sport Horses LLC. Aboard Dominik, Gochman won the stake, handy, and under saddle classes, and earned second and fifth places over fences. 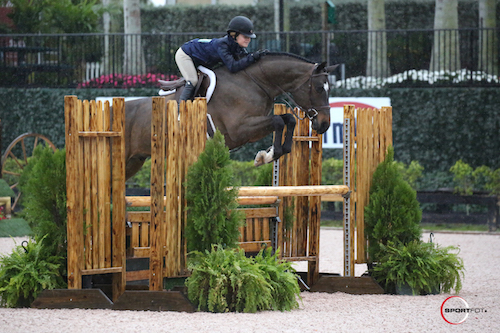 Dominik is a nine-year-old Warmblood gelding that Gochman has ridden for the past year. During the 2016 show season, Scott Stewart also showed the gelding in in the Second Year Green Hunter division.

“He’s very sweet and likes a lot of attention and treats,” Gochman said. “He really loves showing and always tries his best. I always have such a great time on him.”

Mythical, a 13-year-old Westphalian gelding by Cornet Obolensky, has been in the Gochman family for several years now. Sophie Gochman’s mother, Becky Gochman, previously showed him in the Amateur-Owner Hunters before giving the ride to Sophie two years ago. Gochman navigated Mythical to first and second place finishes over fences, second place in the stake, fourth place in the handy, and third place under saddle.

“He’s like a little teddy bear,” said Gochman. “If Mythical is laying down in his stall, I can go and lay on top of him. My mother and I have both had a lot of fun on him. He’s a great family horse.” 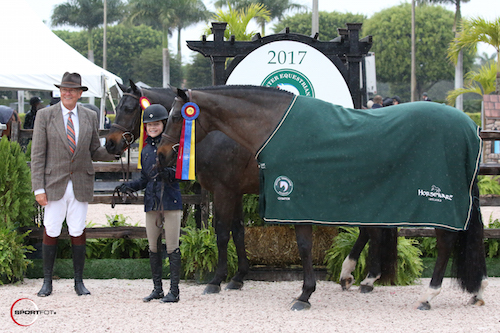 Gochman has been coming to the Winter Equestrian Festival (WEF) for eight years now and enjoys the opportunity to encounter riders from all over world here at WEF.

“There are so many people, so many international riders. It’s really great because you get to see all these different cultures and the different styles of riding,” Gochman detailed.

The 2017 Winter Equestrian Festival continues with its fourth week of competition, sponsored by Ariat®, on February 1-5, 2017. The week’s highlights include the $35,000 Ruby et Violette WEF Challenge Cup Round 4 on Thursday, February 2, the $35,000 Suncast® 1.50m Championship Jumper Classic and Great Charity Challenge, presented by Fidelity Investments®, on Saturday, February 4, as well as the $216,000 Ariat® Grand Prix CSI 4* on the grass field at Equestrian Village at PBIEC on Sunday, February 5, at 3 p.m. For full results and more information, please visit www.PBIEC.com.