A large crowd was on hand to watch eight entries from the 28-horse starting field jump clear over the track set by U.S. course designer Anthony D’Ambrosio.  With the field narrowed down to the best of the best, the jump-off saw young up-and-comers such as Deslauriers and Ireland’s Daniel Coyle, 22, go head-to-head against athletes with decades of experience in the sport. 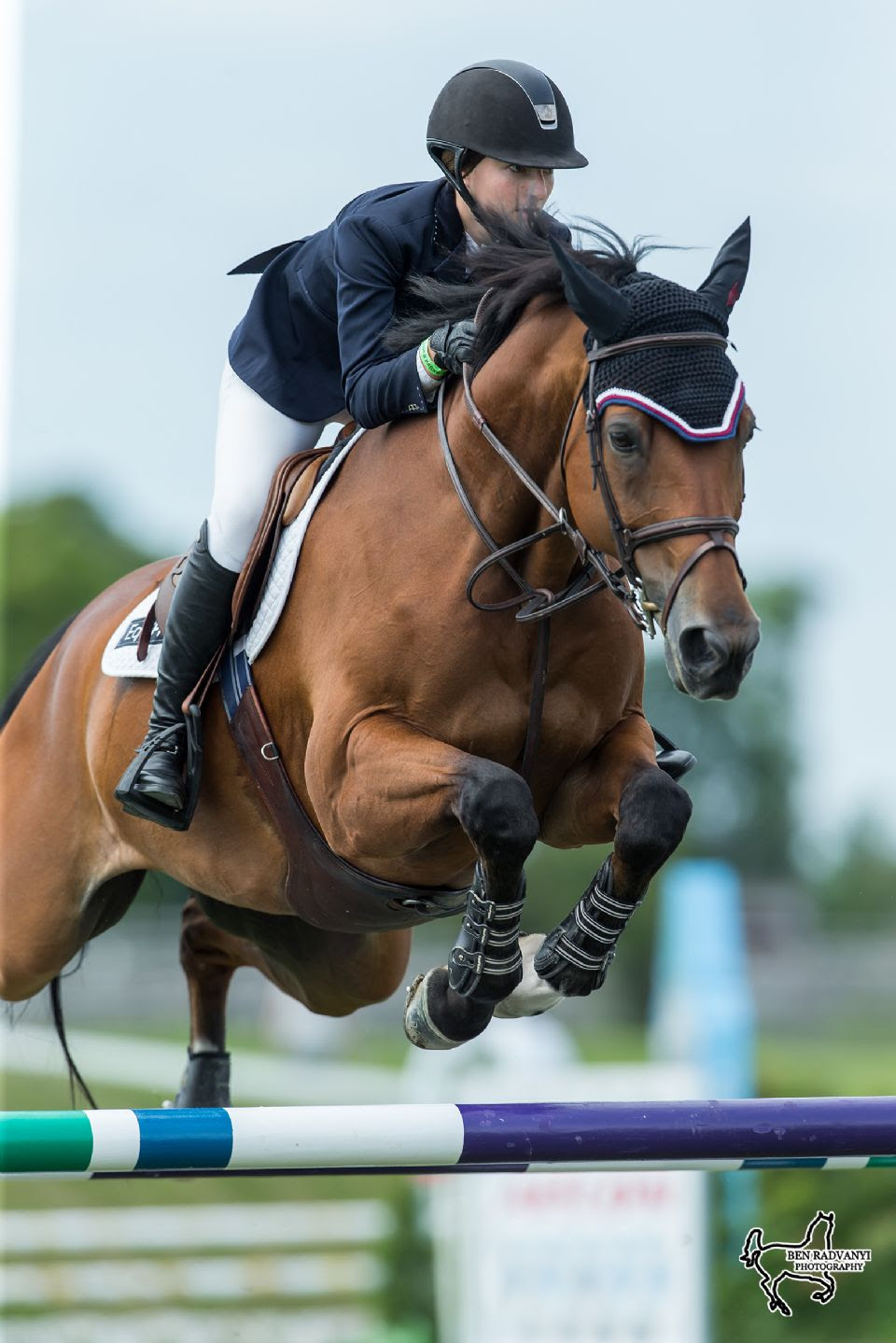 Hot off their win in Thursday’s $40,000 CSI3* RBC Open Welcome, Deslauriers and Hester were the penultimate combination to return to jump-off.  They were chasing the time to beat of 38.20 seconds set by Jonathan McCrea of East Windsor, CT, riding Aristoteles V, owned by Candy Tribble and Windsor Show Stables.  In a display of skill and confidence well beyond her years, 18-year-old Deslauriers made quick work of the jump-off course, racing home in a time of 35.88 seconds to overtake the lead.

There was only rider left to challenge, but when that challenger holds the world record for most Olympic appearances by any athlete in any sport, nothing can be taken for granted.  At 70 years of age, Millar of Perth, ON, gave Deslauriers a run for her money riding Dixson, a 14-year-old Belgian Warmblood gelding (Vigo d’Arsouilles x Olisco) owned by Susan and Ariel Grange.

“I definitely thought Ian would have to run a little bit to get the win,” said Deslauriers, a full-time high school student who balances her studies with her athletic pursuits.  “My horse has a huge stride and is naturally quite fast.  I knew it wasn’t going to be that easy to catch our time but he’s Ian Millar, he can do anything!” 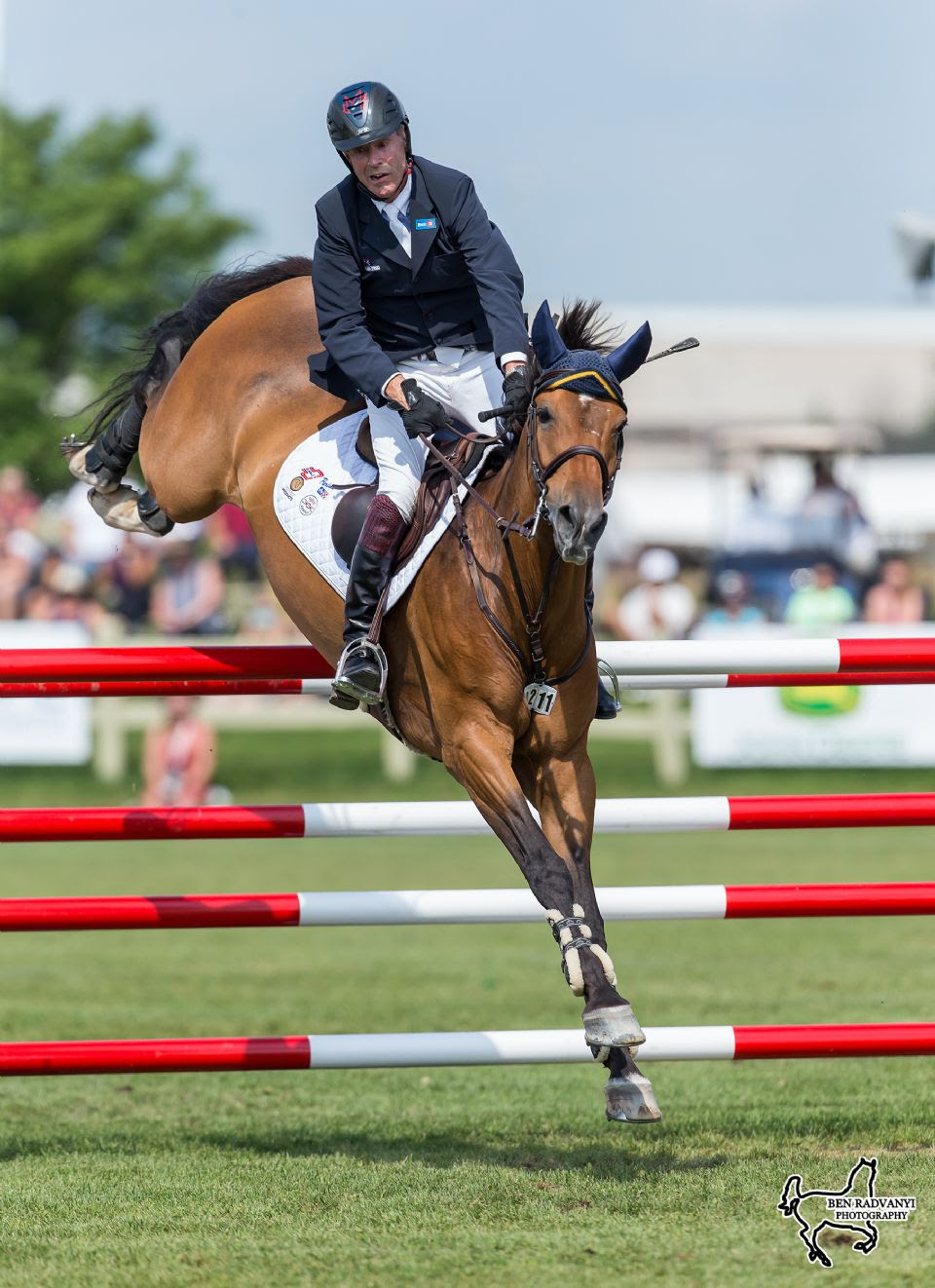 Millar kept the crowd on the edge of its seat as he sliced and diced his way around the short course, but his jump-off time of 38.07 seconds would see him settle for second place.

Deslauriers was coached to the win by her father and fellow competitor, Mario Deslauriers, who has been Millar’s teammate on numerous occasions, including at the 1984 and 1988 Olympic Games.  Mario Deslauriers himself had a horse in the jump-off race for the $100,000 CSI3* Grand Prix, placing seventh with Bardolina 2 as well as posting the fastest four-fault effort in the opening round with Westbrook to take ninth.

Having just completed his jump-off round as his daughter entered the ring, Mario Deslauriers offered a final piece of advice, telling her to leave out a stride down a line of fences to save time.

“We had walked eight strides and I hadn’t seen anyone do seven strides,” explained Lucy Deslauriers of her jump-off strategy. “He said a bunch of people did, so he gave me that last minute tip.”

The tip worked, as Lucy Deslauriers and Hester, a 12-year-old Belgian Warmblood gelding owned by her mother, Lisa Deslauriers, earned one of the most lucrative victories of the young rider’s burgeoning career.

“It feels pretty surreal,” said Lucy Deslauriers, who collected the winner’s share of $33,000 in prize money.  “It’s definitely one of my biggest wins yet.  It’s sort of unexpected; you never think you’re going to win both the Welcome and the Grand Prix.  I just tried to be smooth and give Hester a confident ride, and I let him do the rest!”

Family-friendly ‘Celebration of the Horse’ activities will also take place from 10 a.m. to 4 p.m. on Sunday, offering a kids’ zone with pony rides, bouncy castles and slides, face painting, balloon and glitter artists, children’s jumps, and many more activities.  Admission is $5 a day at the gate, with children aged three and under admitted free.

For more information on the Ottawa National Horse Show and CSI3* Ottawa International Horse Shows, visit www.wesleycloverparks.com.  Be sure to keep up with all the action by following Wesley Clover Parks on Facebook here.

The Government of Ontario has generously provided funding support for the Ottawa National and CSI3* Ottawa International Horse Shows.