Duplain earned the win aboard Run Forrest Run, a 12-year-old OTTB that she purchased off the track five years ago.  The duo was the fastest of 27 entries, taking the win with a time of 58.11 seconds.  Finishing a close second was Kim Farlinger of Orangeville, ON, who crossed the timers in 58.14 seconds riding Cayman.  Rounding out the top three with a time of 61.30 seconds was Sam Pegg of Cannington, ON, riding Peri Pur.

“I was trying to train him as an eventing horse before, but he didn’t really like the water and the woods and everything that goes along with eventing,” Duplain said of Run Forrest Run, better known as ‘FoFo’ around the barn. “However, he does love to jump, so four years ago we changed to jumpers.” 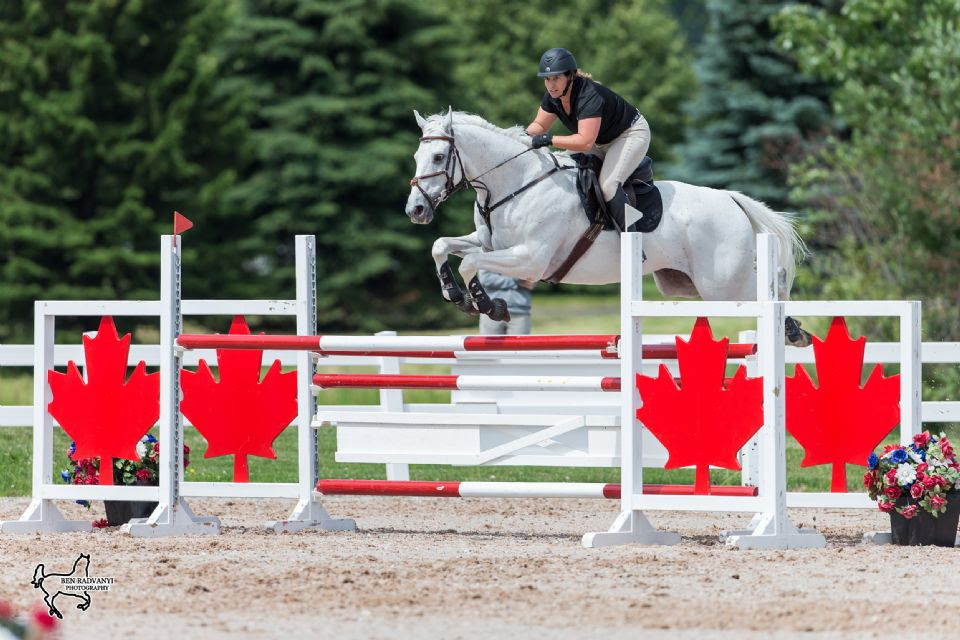 Since then, Run Forrest Run has stayed true to his racehorse roots and proven successful as a speed horse.  Duplain plans to campaign her mount in the $7,500 Lynn Millar Memorial Speed Derby on Saturday  afternoon, July 15.

“This is our first year coming to the Ottawa National Horse Show; it’s really, really cool!” said Duplain, who trains with Nicolas Xavier Belanger.  “I really love the grass ring.  It’s a big ring, and it’s nice to ride in.  And the All-Weather Ring, as we saw this morning after the rain, is really all-weather!  The footing was perfect, and we’re looking forward to jumping on the grass this weekend.”

Another first-time visitor to the Ottawa Horse Show, Tamara Ducatel of Oka, QC, won the 1.20m Junior/Amateur speed competition.  Ducatel had the fastest time of 58.57 seconds aboard Mylenium Joe, a 12-year-old bay gelding that she has owned for six years.  Samantha Cowan and Woegandia finished second with a time of 60.60 seconds while Alexandre Gonzalez was third with a time of 62.14 seconds riding Let’s Go Star.

“Mylenium Joe is my best horse; I love him so much!” said Ducatel.  “He gives me everything; his heart, his body, the planet!  I have so much ability to remove some strides between two jumps with him, so when it’s a speed class or a jump-off, I know he knows perfectly what he has to do.  It’s really easy to win a class like that.  I just have to be in my place, and he’ll do the rest.” Amber Marshall will be making a special guest appearance at the Ottawa National Horse Show on Saturday, July 15, and Sunday, July 16.  The star of star of CBC’s award-winning Heartland, Marshall will emcee festivities for the entertainment of spectators and competitors alike.

Admission to the Ottawa National and CSI3* Ottawa International Horse Shows is $5 a day at the gate, with weekly admission passes available for $20.  Children aged three and under are admitted free.

For more information on the Ottawa National and CSI3* Ottawa International Horse Shows, visit www.wesleycloverparks.com.  Be sure to keep up with all the action by following Wesley Clover Parks on Facebook here.

The Government of Ontario has generously provided funding support for the Ottawa National and CSI3* Ottawa International Horse Shows.