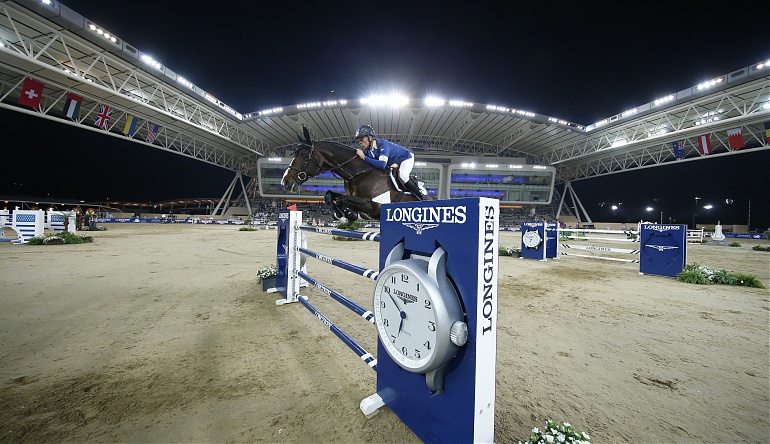 An all-star cast of eight out of the world’s top 10 riders are heading to AL SHAQAB, Qatar, for this weekend’s climax of the 2017 Longines Global Champions Tour and Global Champions League.

There will be a captivating battle for the final overall ranking places after a season of phenomenal Longines Global Champions Tour Grand Prix action across the world in stunning locations.

With competition reaching new heights this year, the LGCT season has seen nail-biting split second finishes from the best horse and rider combinations who consistently compete at every event.

Talking about the top calibre events, Scott Brash said: “The level of competition on the GCT circuit is so high, so to win a Grand Prix or League class you and your horse have to be at the absolute top of your game.”

Lorenzo de Luca said he will be “giving everything” to keep his second place in the overall LGCT championship ranking and said: “GCT is one of the best and most difficult circuits in the world.”

Madame and Quilata enroute to Doha for the @gctevents final

New LGCT Champion Harrie Smolders, who made history this year by taking the title at the penultimate event in Rome, said: “In the Global Champions Tour the level is very, very high because we have the best horses and the best riders in the world. A higher level is not possible.”

Walter von Känel, President of Longines, said: “We are pleased to be back at the magnificent Al Shaqab Equestrian Centre which will once again provide the perfect backdrop for this much-awaited final of the series. Our brand also looks forward to the weekend’s highlight, the Longines Global Champions Tour Grand Prix of Doha, to which we lend our name.”

Lorenzo de Luca (ITA) currently sits in second with 260 points overall, with Christian Ahlmann (GER) just three points away on 257. Alberto Zorzi (ITA) is only a two-point whisker away on 255 points. Maikel van der Vleuten (NED) and two-time LGCT Champion Scott Brash (GBR), on 247 and 245 points respectively, will be formidable opponents in the final deciding LGCT Grand Prix of 2017.

In the Global Champions League race to the finish line, teams are tactically fielding heavy-weight combinations for the final push for the overall ranking and season prize money. Hamburg Diamonds and Valkenswaard United lock horns for the final time in 2017 after their intensive duel for the title crown saw them pull ahead of the pack on points. Other teams including Miami Glory, Paris Panthers, Mexico Amigos, St Tropez Pirates, London Knights, Doha Fursan Qatar, Rome Gladiators and Shanghai Swans will be jostling for an overall GCL Top 10 finish.

All American Riders in Doha:

The finals will play out on the grand stage of AL SHAQAB, a member of the Qatar Foundation. This year, AL SHAQAB celebrates it’s 25th anniversary, and the three day event from 9th – 11th November will hold something for all the family, with a kids entertainment area, Arabian displays and a special show to celebrate the anniversary. National riders will also compete with the opportunity to see their home and Olympic heroes such as Sheikh Ali Bin Khalid Al Thani (QAT) and Bassem Hassan Mohammend (QAT) in action.