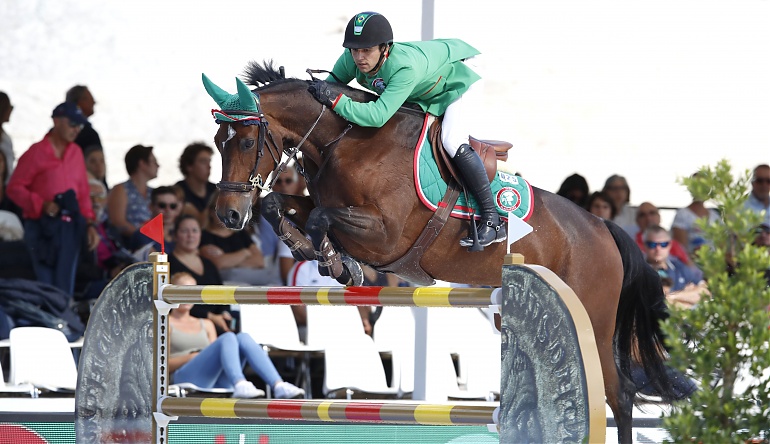 It was a spell-binding performance on the opening day of Longines Global Champions Tour of Rome as Brazil’s Marlon Zanotelli and his 10 year old mare Celena VDL stormed to a spectacular win.

A delighted Zanotelli praised his horse: “This mare is unbelievable – I must thank my whole team at home and the VDL stud who give me the opportunity to ride this special horse. She’s so clever and so careful – she fights and gives everything in the ring. She won her last CSI5* class in Valkenswaard, and now she wins her first class here so I’m really happy.”

First to go in the competition, Zanotelli had the tough task of laying down the gauntlet for the rest of the world-class field yet to come. “It’s not easy going first, but I made my plan and it worked out. I didn’t think I’d win, but I did a clean round, putting the pressure on the others.”

Fending off Leopold van Asten (NED) with VDL Groep Miss Untouchable, who took second, and Julien Epaillard (FRA) with Usual Suspect d’Auge, who took third, Zanotelli beat the seven rider jump-off to finish as one of only two double clears.

Fans basked in glorious sunshine at the magnificent Stadio dei Marmi, as the 14th leg of the Championship race kicked off. Broadcast on TV and on Facebook Live, all eyes would be on the riders to see who would finish on top today.

Brazilian star Marlon Zanotelli, rose to the occasion as as GCL home city team – the Rome Gladiators – by putting in a brilliant pioneering round with Celena VDL. Those early to go looked strong, lulling the crowd into a false sense of ease after Julien Epaillard (FRA) with Usual Suspect d’Auge, Emily Moffitt (GBR) with Hilfiger van de Olmenhoeve and Max Kühner (AUT) with Chardonnay 79 all jumped clear.

But it was anything but simple as Uliano Vezzani had put together an artfully designed course, testing the riders throughout. A tricky distance down the long side of the VIP hospitality caught out many of the riders, with the imposing fences coming up fast for the horses.

The stadium erupted in cheers after local star Alberto Zorzi (ITA) put in a foot-perfect clear with Fair Light van T Heike, earning a place in the jump-off. He was soon joined by Marcus Ehning (GER) after a stunning performance with Comme Il Faut put them in the running and looking hot to beat.

The shortened jump-off course would see six riders return to the ring for a try at the €92,000 prize fund. Once again first to go, Zanotelli put in a tidy round with his top mare, laying the gauntlet in 37.86s and challenging the rest of the field to better his time.

The pressure was on as the riders tried, and failed, with poles rolling as the world’s best pushed to come out on top. With every pole, Zanotelli looked closer and closer to the win, until Ehning returned to try his luck. Managing Comme il Faut beautifully the German star looked set to better the Brazilian’s time, racing around the corners until the gallop to the Longines fence proved too much and they clipped the plank.

Final rider to go, Leopold van Asten (NED) put in a steady try with VDL Miss Untouchable, opting for a steady clear to guarantee second overall, stopping the clock in 39.46s. So the win would go to Zanotelli, with Epaillard fastest of the four faulters.

Tomorrow will see the Longines Global Champions Tour Grand Prix of Rome kick off at 16:00 local time, with the Global Champions League of Rome taking place at 12:30. The top 25 individual riders from the GCL class will qualify for the Grand Prix, and with the Championship title still open, the best riders in the world will be fighting hard to finish with the maximum number of points tomorrow.