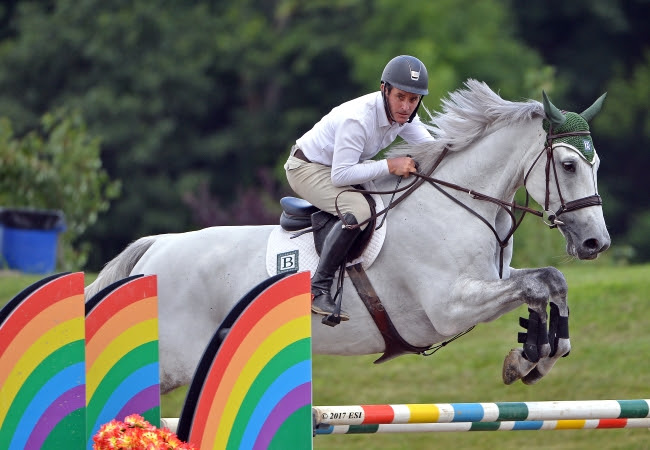 Babington piloted both DOUBLE O SEVEN 7 and CALL ME RUTH to a clean First Round, then stopped the timers in 48.299 seconds for the win riding DOUBLE O SEVEN 7, owned by Katznelson Jumpers, LLC. He earned the fourth-place ribbon riding his own CALL ME RUTH, who also jumped clear in 50.134 seconds. Babington said he has been partnered with both horses for about one year.

When asked of his competitive edge with DOUBLE O SEVEN 7, Babington remarked, “He was fresh, the last show I did with him was at Spruce Meadows a few weeks ago and he really hasn’t jumped a jump since.”

In the First Round, Babington tried a new bit, a loose ring snaffle on DOUBLE O SEVEN 7, and when he felt like he had enough control with it, he let him roll on in the jump-off. “I felt like everything just came up nice, it came up in stride,” he noted.

Since Spruce Meadows in order to keep DOUBLE O SEVEN 7 and CALL ME RUTH in form without jumping, Babington said he has done a lot of field work. “The ground has had just enough rain, and the grass has been perfect, so I’ve done a lot of trotting exercises and slow gallop sessions to keep them fit, and keep their head fresh and away from the ring.”

Originally from Tipperary, Ireland, Babington is an Irish International Show Jumping rider and trainer who has successfully taken part in many major competitions, including the Olympics, World Equestrian Games, and European Championships.

Johnson Horse Transportation is the Sponsor of the Open Welcome at all HITS Horse Show venues, across the country, which include locations in: Saugerties, New York; Culpeper, Virginia; Thermal, California; Ocala, Florida; and Balmoral Park in Crete, Illinois.